GAME OVER! They did it. 11 days and ONE MILLION DOLLARS!

UPDATE: THEY DID IT!!!  I am not surprised and I’m sure you’re not either. Mike Lesakowski was on a mission, he picked the right location, the right crew, the amazingly right players and together – they raised more than one million dollars that will surely help Roswell Park Cancer Institute do amazing things. It’s much needed money in the fight against cancer. Congratulations to a group of men with the stamina, endurance, passion, and heart it took to break a world record and raise an incredible amount of money. Way to go!!! I wrote this original story several months ago – today, I’m so happy to give this update.

Sometimes in life, we are called to do things for a certain reason. Sometimes, the reason is bigger than we are.

Mike Lesakowski had a very personal reason to champion an epic event with a goal of raising one million dollars. That reason is cancer.

Mike’s wife – Amy went through successful cancer surgery and treatment at Roswell Park Cancer Institute in 2009, which he says is his inspiration, “I wanted to figure out a way to give back to Roswell, a place that I came to sincerely appreciate. Hockey has always been a part of my life and I thought an event such as a Guinness World Record hockey game in Buffalo, which is a great hockey town and great community, could be successful and provide an ideal forum to raise money.” 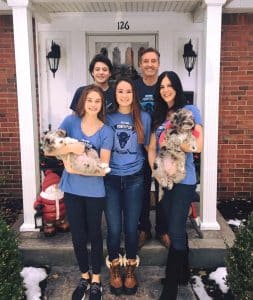 Yes. A Guinness World Record hockey game in Buffalo. Where else would you have such a game? So, Mike and his crew started planning years ago, but a busy dad, a mom fighting cancer, and life – all meant putting it on hold. Until now. In case you haven’t heard about this fundraiser – here’s the deal.

It’s called The 11-Day-Power-Play. 40 fearless players will spend – get this – 250 hours on the ice!  Yes. 250 hours. On the ice. Yes, a fierce fight. But, as Mike says – nothing compared to the battle cancer patients face every day.

Mike and Amy are on a mission. And Mike says the response so far has been amazing, “We have a world class hospital in our backyard that is doing cutting edge cancer research. For this event, our goal is to raise $1,000,000 with donations going to cancer research at Roswell.” 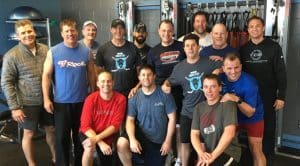 The players are from all walks of life. They are survivors, Roswell employees, business professionals, teachers, scientists, even professional hockey players. You may recognize some of the players, too – including former Sabre, Michael Peca and 97-Rock Celeb and Totally Buffalo Spotlight interviewee, Dave Jickster. 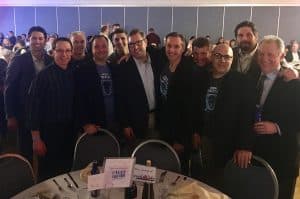 The guys have their own reason for playing. Mike says they’re all working hard to raise money – and to prepare for this epic game, “Lots of coffee! Just kidding. We will be playing in shifts around the clock. Groups of 7 will be playing in approximate 4-hour shifts, while the remainder of players will be resting, sleeping, eating, etc. We are limited to 40 total players, two teams of 20; no substitutions are allowed once the puck drops on June 22. Except for 10 minute breaks when the Zamboni cleans the ice every hour, we will play continuously for at least 251 hours.”

This is a passion project – there’s no doubt about it, “We have taken on this cause with great passion and energy and hope to inspire others to do what they can to give back to this or other worthy causes. We also hope our children learn valuable lessons being part of this event and are inspired to do the same,” and Mike adds, they can’t do it alone. 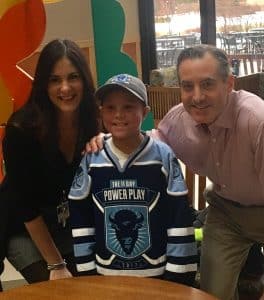 And then there’s little Emmett Jakubowski. The 11-year-old Buffalo boy is a cancer warrior and event Ambassador. Mike says the little guy is a quite a big inspiration, “In a nutshell, he is an intelligent young man who was dealt a tough hand…he has undergone bone marrow transplant and has endured two types of Leukemia and is only 11. One of my favorite days is when we asked and he accepted the role of Ambassador of our event.” We think he is going to be an amazing Ambassador.

I know what you’re thinking – you wish you could help. Oh, you can. In fact, there are a few ways to help.

You can find more information and make a donation on their website.

The event is June 22-July 3 at HARBORCENTER.