They’re BACK! Spreading music and hope around Niagara Falls

If you’ve been in downtown Niagara Falls lately, you may have noticed pianos around town. Beautifully painted pianos. Three of them for now.

They’re the brainchild of local artist and musician, Rose Lorenti. Rose has wanted to see street pianos out and about for some time, but her ideas were always struck down, “In January I had been talking with someone about public pianos in Niagara Falls and how wonderful it would be, but all they could do was ridicule the idea of it with negativity; saying they would be vandalized and broken and no one would volunteer to take care of them.”

But, this is one lady who wasn’t about to take no for an answer, “This bothered me, infuriated me, and nagged me in the back of my mind that so many people were so negative about an idea before even seeing what it could do.”

Rose kept thinking about how she could do this. With support from family and friends, she decided to take it on – herself, “In March I was given the opportunity to pitch the idea to Niagara Falls Community Development director Seth Piccirillo. I walked in with a notebook full of plans, ideas, budgets, back up plans, a hashtag, Facebook page, Instagram account and a full synopsis of what to do. Seth was all for the idea and by amazing chance- he had pianos waiting for just the right project, and this was it. I got right to work!”

Pretty soon businesses were getting involved.

Casal’s Boxing Club and Custom Canvas Covers  made donations and helped with the cause, but it was mainly on Rose, “Other than that- I took full financial responsibility for the project knowing that there would be a lot of apprehensive speculation ahead of me. Myself and a friend spent our spare time having the pianos tuned, repaired and painting them.”

Soon, all the work was coming to life, “On June 16, 2017 we unveiled three beautifully painted pianos; The Rainbow Piano on Rainbow Boulevard at the Visitor’s Center, The Tetris Piano on Old Falls Street by the entrance to the state park, and The Abstract Piano on Third Street at the entrance to the Art Alley.” 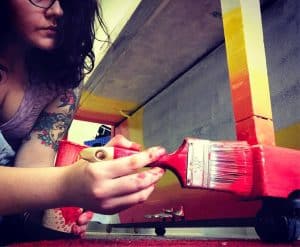 They are beautiful and they’re being watched over. Each piano has what’s called a ‘Piano Pal’. A volunteer to tend to the piano, “The Rainbow Piano is outside the Niagara Falls USA Visitor’s Center, so every day their staff cover and uncover it during their hours of operation and when it rains. The Tetris Piano is on a block of Old Falls Street that is full of games and activities for visitors and tourists to play- the perfect place for a fun piano! The Old Falls Street staff minds that one under the same conditions. The Abstract Piano on Third Street is the one I take care of myself. It is on my route to work, up the street from my office, and 5 minutes away from where I live. Being a musician myself in the band Billy Draws Two, it is also the one that I frequent the most for those same reasons.”

Since unveiling the piano project, Rose has received nothing but amazing feedback, “Since unveiling the piano I have received nothing but amazing feedback! Every day I hop onto Instagram and Facebook and search the #NFpianos hashtag to find pictures and videos of smiling faces. From people playing classical tunes to jamming their own creations to adults and children playing chopsticks”

So far, things have been great. Rose says three more pianos will be hitting the streets very soon! 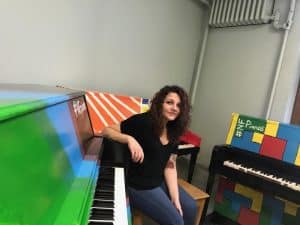 Rose took a risk and found that those pianos do much more than make music. They create a sense of harmony; music certainly has a way of doing that, “It was amazing to be able to see these posts and think to myself “I proved the naysayers wrong. Everyone thought this would fail, everyone only wanted to assume that people would vandalize and destroy these beautiful instruments, but they were wrong.” I took a big risk, and I got my reward out of it; those happy faces, the beautiful music.”