Talk about Brotherly love – this is heartbreaking and inspiring

Family is always there for family. That’s what we all like to think. And hope.

The Cirrito family proves it to be true. Theirs is a story about love of family. Strength to do what’s necessary. And courage to fight.

The family – with six boys – lost their dad – their only caretaker – a few months ago. The youngest siblings -Santino just 12 and 13-year-old, Niko – needed to be cared for. So, their 20-year old twin brothers, Anthony and Angelo – who they are very close with – fought for custody. And won.

Think about that for a second.

Two 20-year-olds – caring for their younger brothers. Fighting for them – so they wouldn’t be split up and sent to live in two different homes.

Their older brother, Charles – who is also helping to care for the boys, told me it’s a team effort and they are all doing as well as can be expected, “Put it this way, they have a lot on their plate. I’m very proud of them.” 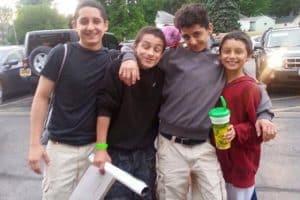 Just look at this picture. Those boys are 20 years old (on the left and third from left). They’re so young. Caring for the other boys still in middle school. It is amazing. That is an act of true love.

Santino and Niko are typical boys – they love hockey, video games, and fishing. They also love their brothers. Immensely. Charles is amazed at their strength, “The boys are so sweet. They are where they want to be. They have such good hearts.”

The thing is, it’s not easy. Raising children is tough. Raising children when you’re barely an adult – is even tougher. Charles says they’re all doing what they can to pitch in, “There’s a lot more costs to raising kids than I ever thought.”

Their dad, Charles – passed away in July. “We are left with just under $5000 worth of funeral bills. We would like to get a head stone for our father and we hope to do that. A gofundme was set up and maybe we can do that.” Charles admits there are challenges, but says they’re making it work, “Right now we are just doing what we can to survive.”

The four boys live in West Seneca – their two older brothers live close-by. So far, the community has stepped in, which is no surprise, “I’m floored. Completely floored. I was not expecting this. I am in tears. It couldn’t help a better group of boys. They are amazing.”

You can help the Cirrito brothers.  Here are two ways to help the family.

BENEFIT: A fundraiser will be held on Friday, February 24th at the Rusty Buffalo, 270 Center Road, West Seneca.