Babcia’s Pierogi – made with love and family.

Babcia’s Pierogi is about as family as you can get!

George and Linda (Ziolkowski) Lund began the idea of creative and innovative pierogi fillings in 2001, “We realized that the art of pierogi making was becoming lost among the younger generation,”  Linda said. “The tradition of families coming together at Christmas & Easter to make one of the most popular Polish comfort foods, the pierogi, was no longer. With this realization, we wanted to find a way of making pierogi a year round food.” 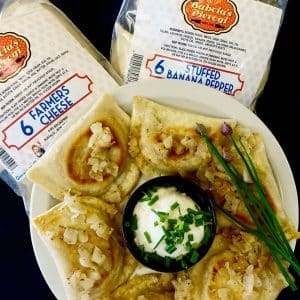 And that is exactly what they did. They got creative, innovative and excited. They discovered some gourmet-type pockets of love, “Our friends were our test panel & kept coming back for more as we had perfected the flavors that are now signature to our city, Buffalo, NY,” Linda said. “Much to our surprise, our new unique flavors became a hit & the orders started pouring in. Now, it was time to take the show on the road. We began doing concession events with our new food trailer in the Spring of 2015. In November 2016, we moved our pierogi business from a small rented commercial kitchen in Lancaster to Buffalo’s Famous Broadway Market in order to expand our production.”

And this family-run operation has expanded even more!

They were voted “Best New Food” at the Erie County Fair in 2017. They have classic pierogi – and some combinations that are hugely popular. “Today, our most popular flavors are the traditional farmer’s cheese & our stuffed banana pepper pierogi, which have developed a cult following at all of our concession events!  One additional favorite is our kielbasa bomber sandwich.  It’s a grilled smoked kielbasa topped with sweet and sour red cabbage  (kapusta). We sell hundreds of them at our concession events!”

You can find Babcia’s Pierogi inside the Broadway Market, around town in their food truck or at these fine establishments in WNY.

Babcia means Grandma in Polish – which is fitting because they use family recipes for all of their traditional pierogi. They buy fresh ingredients, local whenever possible. All of their sauerkraut is fresh-made in 300 pound barrels, a process that takes 4-6 weeks!

And each pierogi is made with love.  Buffalove.

You can check out Babcia’s Pierogi at the Totally Buffalo Festival at Buffalo Riverworks on May 26, 2018!

Get ready for the 2nd annual Totally Buffalo Festival – Of course we’re doing it again!

← previous post next post →
← Roy's Plumbing, Heating & Cooling - more than just a business, a part of the community Jewelry that could actually save your life. Like, literally! →