For William Herman – writing has become a second career. And quite a leap from his first in the aerospace manufacturing business! It was a bit of a jump from left brain to right!

The outcome: South of the City.  It’s a murder mystery based in Buffalo and the Southtowns; a novel which started about ten years ago. For Herman it was an on-and-off labor of love for more than a decade. Eventually, a few years ago – he found the time to rewrite, self-edit, and self-publish the book.

Of course it was a process. Herman says his wife, Sally was a huge asset,  “Having an understanding wife to bounce ideas off of is very helpful also, even if they sometimes involve a fictional murder.” 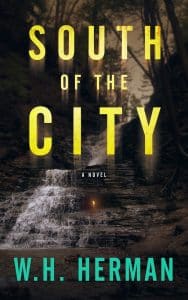 A thriller that takes readers to a small town where people feel safe, but – maybe they shouldn’t, “When the curtain is pulled back things are much more complicated, and sometimes much more dark and dangerous, than it would appear. It’s a study of a handful of interesting characters whose lives are intertwined in unexpected ways, and events that spiral out of their control.”

Did you notice the cover of the book? It has the Eternal Flame – which can be found in Orchard Park! And there’s more to recognize, “There are mentions of the city, our unique lake-effect climatic conditions, and other things that convey the feeling of living in and around Buffalo, but the local action takes place just south.” You’ll also find a scene at the Peace Bridge and on High Street. 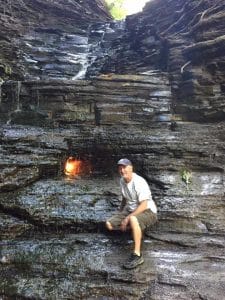 I was curious about the process of publishing the book, “Actually the self-publishing process was great, very rewarding.” Herman says, “After re-writing the book with a new opening sequence and a more complete ending, I thought it was ready to publish. Rather than hire an editor, I read it through a half-dozen times to find and correct any typos’, grammatical errors, and downright mistakes in the story. My family helped by reading the first proof copies and letting me know what they had found.” 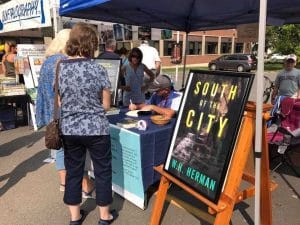 Then it was off to the final step, “When I considered it ready, I hired a company called Damonza.com to do the required formatting, so the book would be ready for printing as a paperback and also download properly to a reading device such as Kindle or Nook. Then there was the process of creating a cover, also by Damonza, which in the end featured a photo of the Eternal Flame that I submitted.”

“Once the files were approved and paid for, I was able to upload them to the Createspace website and from there to Amazon. Right now it’s available online at Amazon, Barnes & Noble, Apple iBooks and Kobo in ebook or paperback format. A number of local shops also carry it, and I do signings at stores and craft fairs, which have been well received.”

The labor of love turned into a dream come true, “It’s really rewarding to actually see South of the City in print, and to get readers’ reaction to it. Lots of fun!”

You can buy the book online at Amazon and Barnes and Noble.   You can also buy the book in paperback at Vidler’s, Alden RX, The Book Shoppe in Medina, Kenmore Cardsmart, and the ECMC Gift Shop.

← previous post next post →
← For those wanting to meet K-9 Officer Shield - here's your chance! Santa for children with Special Needs. How great is that! →