We are SO happy to give you this update! Wink, the adorable blind dog has found a forever home! And, he couldn’t be happier.

We first told you about this very special rescue pup a few weeks ago. Today, we got the news – he’s home. Officially.  Kelly Ann, who’s been fostering Wink says this of his new home, “Wink is looking so proud in his new home. I couldn’t ask for a better home and dad for Wink. It was the home I’ve been looking for. He’s going to be spoiled and he’s already so loved !! He mastered everything in 10 minutes and already has a favorite turkey toy !!!! He’s getting his happy every after !!!”

He is from the Jasper County Animal Shelter in Jasper, Texas. 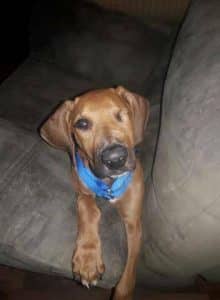 He went into the vet as a 6-week old pup for trauma to his eye. When the vet told them he was going to be blind, the owners were reportedly going to take him home and ” knock him on the head”.  Luckily a vet tech stepped up and took him to the shelter to see if a rescue could take him. 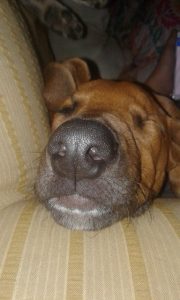 His left eye was too far gone to save, so they had to remove it. They tried saving his right eye, but unfortunately the ulcer caused too much scar tissue and he only has 1% sight in that eye.

Kelly Ann Getty works with Buddy’s Second Chance Rescue. The Kenmore facility brought Wink to WNY from the Jasper County Animal Shelter. The transport to bring the dogs up is very costly and they rely on donations.

Kelly Ann is fostering the little guy – and says he is a very special dog.

“As soon as I saw his story, I knew I had to have him. Our rescue pulled him and 13 other hurricane Harvey survivors.”

Wink is blind, but he doesn’t let that hold him back, “He is perfect in every way. He relies a lot on his nose and his hearing. He bumps into things occasionally, but he’s learning the layout of the house quickly. He’s a big love bug, and loves to curl up in your lap or being held in your arms .”

He’s a great inspiration to all; being blind and not giving up.  He’s going to make a great addition to a family. Maybe your family.

If not, there are other options.

“We also have Harvey, who has an injury to his leg from the hurricane and may have to have it amputated, and then Polly who has a cyst on her neck. They all were going to be euthanized if a rescue didn’t step up and help them. Even with their injuries, we felt they should have every chance to life a happy life.”

But right now, we’re focused on Wink. The little guy will have you wrapped around his paw in a matter of minutes. Can you give him a home?

← previous post next post →
← I am so very proud of my city. Reflections on this day. Petition going around to rename Buffalo dog park after Officer Craig Lehner →