Celebrating LOVE – “I… couldn’t stop on the ice and hit him.” Yep, a car crash brought them together.

And maybe sometimes literally IN an accident.

That’s what happened with Barbara and Jim Abbatoy of Angola.

Barbara says it wasn’t exactly the most romantic beginning, “It was a car accident. In 1976, during an ice storm I was at an intersection in Buffalo and couldn’t stop on the ice and hit him, and then I was hit from behind also and hit him again, broke my nose on my steering wheel and he took me to the hospital.”

Jim took Barbara to Lafayette Hospital but she says it didn’t end there, “He visited me while I was in the hospital and told me that when I get out, we are going to go on a date, and we did! Nose cast and all, we went to the Beachboy’s concert and now we are happily married for 35 years, True Love!” 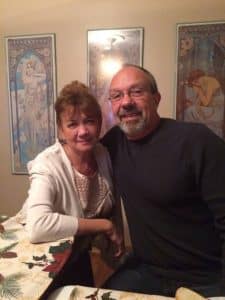 So from a car wreck to true love. Proof that you can find true love just about anywhere.

Thanks for sharing your love story!

← previous post next post →
← Totally Buffalo teams up with Slow Roll Buffalo for the Totally Buffalo Festival! Celebrating LOVE: Jillian shares her story of how Dan didn't let cancer scare him away from HIS love. →