Larry Levite passed away six months ago, but as his wife, Sharon tells us – his legacy certainly lives on.

Larry Levite was a larger than life figure in our community.

To many of us in the media, he was an inspiration. A force. He was beloved and his legacy surely lives on through his family, his work, and everyone who was lucky enough to know him.

He passed away six months ago, leaving a void in the local publishing world, and in the hearts of all of those who knew and loved him.

The former owner of WBEN and publisher of Buffalo Spree magazine, died on April 26 –  his 77th birthday.

The Buffalo Spree, currently in its 50th year of publishing, is a high-quality regional magazine with an emphasis on arts, culture, food and drink, and homes and gardens – with more than 136,000 readers. It was something Larry Levite had great pride in, too. He gave back to this community he loved so much and his legacy lives on. 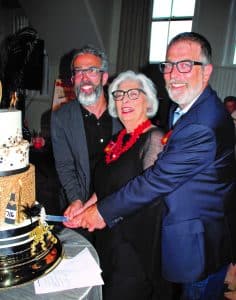 We caught up with Larry’s wife Sharon via email and asked her about her late husband, his legacy, and the future of his beloved magazine.

Sharon: Every issue that Spree published, since Larry took it over in 1999, was a milestone to be celebrated, and he made sure visitors to our offices knew about it—all the post-1999 Spree covers are displayed in a massive grid on the walls of Spree’s reception area. Larry also loved celebrating the magazine’s anniversaries, including Spree’s fortieth anniversary, the first to occur under his leadership. For the fortieth, we simply did a special issue, but fifty is a bigger symbolic number, and he began talking about how we would celebrate that milestone at least two years before it occurred. The magazine was more than a business to him—it was in many ways a gift to the Western New York community—and he wanted the anniversary celebration to be full of gifts for everyone who attended. So the discussions of the party often focused on how we would entertain party guests, what they would take away with them, and which charity (or charities) would benefit from the party. During his years leading Spree, Larry made the transition from a “radio guy” to a “magazine guy.” His office was filled with national and regional magazines, and he loved the idea of celebrating the resilience of print.

Sharon: I think his love of Western New York was always part of why he published Spree, and the magazine expressed that in many ways. He’ll be remembered for that. He will also always be remembered for his radio years and the important role he played in the history of local media.

Sharon: People in radio still talk about Larry’s offices, which were always filled with toys, art, posters, memorabilia, books, and much more. His Spree office was the same. Visitors love the large stuffed animals that have always been incorporated into the office décor. Larry was also notorious in his radio days for using any excuse to throw a party, featuring large platters of shrimp! His personal style was also distinctive. When it was announced at a public awards event in 2013 that Spree would move into Rocco Termini’s Foundry complex on Elmwood, Rocco quipped that he’d had to promise to “dress all in black, like Larry Levite,” if Spree would commit to the move.

Sharon: Larry was always thinking of other possible publications and he greatly expanded the reach of Buffalo Spree Publishing from one magazine to twenty-four other publications, including a Rochester division. So I’m sure he would have added another two or three to that number—maybe more program books or another special interest/niche publication. We’re hoping to continue expanding, as he would have wished. Spree will not only continue, it will also grow and improve. The Levite family continues to own and manage Spree and we have big plans.

Sharon: The list of Spree’s donations to local nonprofits and sponsorships of charity events over the years is well into the hundreds. Supporting Buffalo-based causes was essential to both Larry’s business philosophy and his personal commitment to the region and its continued well-being. Perhaps Buffalo Spree Publishing’s biggest commitment to Buffalo was its move into the city in January of 2014, to the magnificently renovated Foundry complex. This helped BSP play a role in Buffalo’s rebirth, and that meant a lot to Larry.

Sharon:  On a personal level, he will be remembered for his big smile, big voice, and big heart. When he entered a room, you knew he had arrived, and always with a kind word for everyone.

For more on Buffalo Spree, check out their website – Buffalospree.com

← previous post next post →
← Special accessory worn by Shield at Bills ceremony was made with love by local artist. Fundraising Gala hopes to be life-changing for those living with Cerebral Palsy →