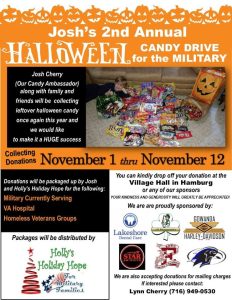 UPDATE: It was a hugely success for year for Josh and his Halloween Candy Drive for the Military. The little boy collected – get this – 900 POUNDS of candy!!!!!  The candy will be sent overseas to troops in five different countries, the VA hospital, several local homeless veterans groups and more!!

It’s Josh’s 2nd annual candy drive for the military. Josh is known as the Candy Ambassador in his neighborhood and beyond. The 11-year-old is on his 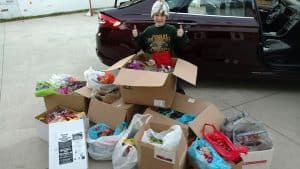 second year of collecting candy. Not to eat. To send off to members of our military.

It all started two years ago when Josh’s mom, Lynn Cherry posted a picture on Facebook of Josh and his stash of candy. So much candy! Like 17 pounds of CANDY! He decided to donate some of it to Comfortable Hugs – who then gave it away.  Last year, he had his own collection and boy was it successful! Lynn’s nephew had enlisted in the Marines and they thought getting that sweet candy to members of the military, like Josh’s cousin would be a great idea. They went around and found sponsors – places that agreed to be drop-off locations. Schools got on board, too – including Eden Elementary where Josh is a student. Would you believe they collected – are you ready for this – they collected 1,100 pounds of candy. All of it was donated. 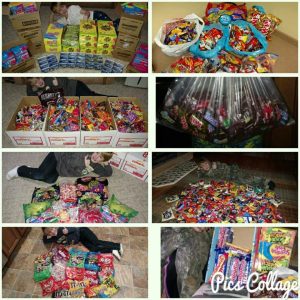 They want more this year.

“This year we have several Large sponsors that we have camouflage donation boxes at including Lakeshore Dental Care, Gowanda Harley Davidson, JP Fitzgerald’s, The Hamburg Village Hall and also at 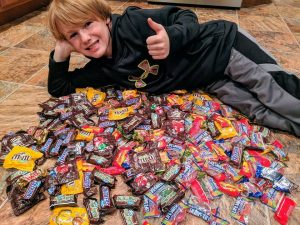 Eden Elementary school, along wit those sponsors we also have STAR swim club and Big Tree Elementary once again collecting for us. Our goal this year is to try and collect even MORE than last year, I want to be able to ship more out troops serving, along with Holly’s Military Hope we want to also be able send a lot to the VA hospital and several local Homeless Veterans Groups.”

You can drop off your donation of candy at Village Hall in Hamburg. (100 Main Street, Hamburg).

They are collecting the candy through November 12th. It will then be packaged up by Josh and Holly’s Holiday Hope and sent to Military currently serving, the VA hospital and Homeless veteran groups.  They are also accepting cash donations to be used for shipping charges. You can call Lynn Cherry at 949-0530 with any questions or to make a cash donation.

Lynn is grateful for help from the community.

“We are so thankful to everyone that shares our posts/flyers and really gets the word out for us. This is not only important to Josh and our family, Holly and her family but it seems as a community as well.”

← previous post next post →
← Grab your skates and get ready - Canalside's Ice Rink opens this week! A list of stores open for Thanksgiving shopping. And a question... what do you think? Good idea? Or not cool? →