The Face of Hope – Meet Emily – The Little Girl Inspiring Others

I’ve been following Emily Keicher’s story for years. The adorable, fierce, fabulous little girl is quite remarkable… and I learned quickly that the apple doesn’t fall far from the tree. Her parents are such an inspiration. The way they live – the way they encourage their daughter – the way they just never give up. It’s incredible really.

It’s impossible to tell how many people this little one has inspired over the years  -but I can tell you this – there’s now proof that her reach is far. A recent article in Huff Post proves that.  A mom – talking about how a magazine cover – a smiling little girl on the cover – gave her hope.

That sweet little girl is Emily. Six years ago, Emily graced the cover of ‘Parents Magazine’ – sporting a huge smile as she broke barriers. You notice her spirit and smile more than that walker. I did a story on the cover while working as a reporter at WGRZ. It was one of my favorites. 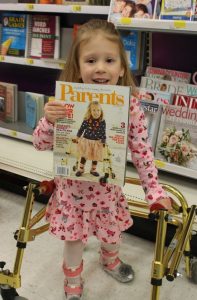 I learned all about Emily that day.

Ten years ago, Liz and Chris Keicher of Lancaster, were given a crushing diagnosis for their unborn child. Their sweet baby would be born with Spina Bifida. It was a scary, confusing, upsetting, devastating time. But, the couple worked to learn all they could. They researched – they talked with family and friends – and prepared for the best while expecting the worst. They were actually encouraged to terminate the pregnancy – which wasn’t an option for the couple.

We spoke with Emily’s mom Liz a while back for a story and she explained that time to us. “When I look back at the bleak awful moment of diagnosis, the dark months that followed and how scary the future looked, it’s hard to believe we are talking about the kid we have today.” The little sweetie loves to read, sing, make crafts, paint, and run.

Well – now, all these years later – a mom talks about how much hope that one photo gave her back when it first came out – and now again. She actually saved that cover from 2013.

In that Huff Post article – guest writer, Mia Carella talks about the moment she first saw that cover.

“The white cover pictured a girl with blonde hair, a little older than Evalyn was at the time. She wore a black-and-white polka dot sweater with a pink tutu skirt. She had a colorful necklace around her neck and a beaming smile on her face. But what stood out to me the most — the most beautiful and eye-catching part of the picture ― was that this little girl was using the same walker we had in our home! Almost the exact one, except for the fact that ours had a silver frame instead of the gold the little girl used in the picture.

I can’t describe to you the feeling of reassurance and peace that came over me. I felt like the magazine was comforting me, and in its own way, saying, “See, Mama? You are not alone. Your daughter will be all right. No matter what, she will be all right.”

This sweet, smiling girl in the picture gave me hope. She showed me that having a walker was OK, and even if my daughter needed it always, she would be OK, too.

I did not know what the future had in store for Evalyn back then. I kept the magazine cover so that I could show it to her one day to remind her that she isn’t alone; that she never was. And ― if I’m being honest ― to remind myself as well.”

Of course Liz was floored to see it. “Yes! I didn’t even know about it. I don’t read huff post, Chris actually stumbled on it and read the caption and thought hmmmm, could it be Em’s?! And clicked on the story and saw it was. He messaged me right away. I couldn’t believe it. The writer saved the cover, stumbled on it again years later and still felt so impacted by it. I think that’s what really got me the most. Of course people saw it when it came out and hopefully we reached people who said yes! That’s my kid, this is mainstream media, yes for representation. But here, she had that moment years ago…And it stayed with her. She kept the cover. She remembers what that moment was like enough to write about it years later. Honestly that means so much to me it’s indescribable. To know one person, either a kid or a parent, saw Emily on the cover and felt included or not alone or okay about their own journey is amazing. It’s why we said yes to the opportunity. And it’s wonderful to hear the stories and the feedback. It provides me some of the same feelings and emotions the writer had described she had. We aren’t alone, we all belong, and there is always someone who can relate.”

None of this is surprising to me. Emily is a very determined little girl who has worked incredibly hard her entire life to overcome any challenges that come her way.

They do not treat Emily as “disabled” or “different” – and they never assume she can’t do something. Instead they watch in awe as she overcomes. You see, Emily can teach all of us to stop sweating the small stuff. To stop worrying about the things we can’t control. She can teach us to stop treating others differently – that each of us is unique in one way or another – and that is what should be embraced, loved, and appreciated. Liz and Chris want for Emily what we all want for our children – happiness and success. A life filled with joy. They want her to feel comfortable and confident in herself, and know she has a place in the world. Because, there is a place for all of us – and it takes time, and effort to find it, but it’s there. Emily can teach us that and more. So can her parents. Liz and Chris can serve as a reminder of the importance of acceptance and advocacy. We are the ones our kids will look to for guidance, love, and support. We are the ones who set the example – to persevere. 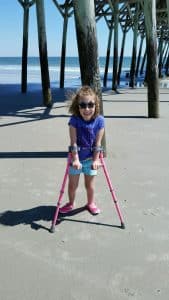 Emily continues to inspire people every day. The article is proof – not that we needed any! Go Emily!!!!

← previous post next post →
← The Uber Driver Who Surprised Passenger With New Dress & Gift Certificate Tells Us Why She Did It! Brave Little Fighters Foundation - Bringing Joy to Sick Children →