Talk about squad goals – these moms are on point! (babies, too)

Sometimes in life, the right people come along – at just the right time.

Jaclyn Miller never imagined her squad would include six other women, all with baby girls just about the same age as hers.

They call themselves the Baby Mama group. 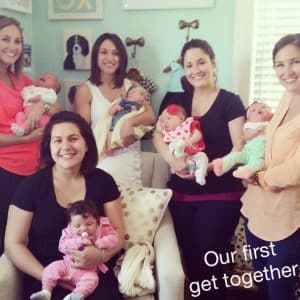 It all started with a pre-natal yoga group at Soma Cura on Grand Island. The ladies are from all different communities – from Niagara Falls to Lewiston to North Tonawanda. They all happened to be due around the same time.

So they formed a yoga-bond. Which turned into something much bigger. Here’s how it went down –

The next day – Melissa had Giuliana.

Kelly had Tessa on April 1st.

Laura had Eleanor on April 4th.

And Marissa gave birth to Vivienne on May 20th.

It was a bond that formed from the usual new mom stuff – sleep deprivation, frustration, and pure joy. 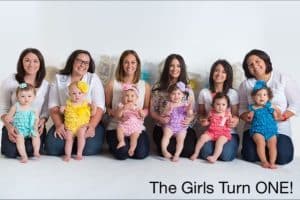 Jaclyn had found her squad, “After initially meeting in yoga we didn’t think much of it until our first get together. We sat around the girls in all their baby seats and carriers in a beyond-exhausted, ‘mombie’ state. Tired and hungry we began chatting and that’s when the bond really began. There was a lot of, “My daughter doesn’t sleep!” “Neither does mine!” “My baby wants to be held all day!” “Mine too!” “Why is breastfeeding soo difficult?!” And on and on we went realizing we weren’t alone.. and better yet we weren’t doing anything ‘wrong’ it was just typical newborn issues.” 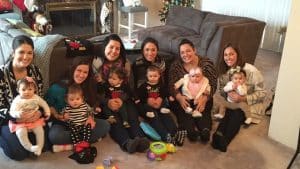 This crew is tight, but not exclusive. They’ve invited other moms into their facebook group to chat and share ideas and stories.

There’s nothing better than knowing you’re not alone in this great big world. And that was the key here. These young moms, trying to navigate parenthood, had backup.

It made a huge difference, “Hearing that it wasn’t just you and your baby experiencing this stuff made it so much easier to go home with your colicky baby knowing you had others to talk to and vent to,” said Jaclyn, “After this day we vowed to get the girls together more often so that we could also get together, for our own sanity. We took walks, had picnics, and started our Facebook group because, to be honest, getting 7 moms and babies together was no easy task!”

What formed was true friendship. Times seven. It turned into gab sessions, walks 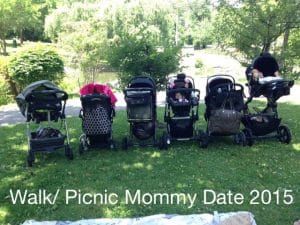 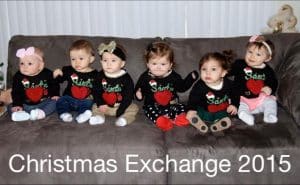 and oh those adorable birthday pictures.

I mean come on. How adorable. 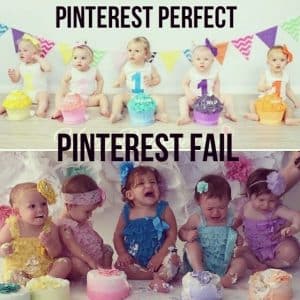 Sure, it’s a Pinterest Fail – but it’s also absolutely perfect. Those little sweeties in their pastel colored lace rompers. Those matching bows. The delicious cake. The beautiful backdrop.

Perfectly imperfect – much like motherhood itself. Which is just how it goes,  “I don’t think we have one picture in over two years where all 7 girls are in it, smiling, and cooperating…but that’s what makes it worth while,” said Jaclyn, “The memories are all we need for it to be a great day!” 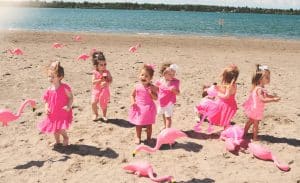 Jaclyn fills me in one more little tidbit,  “Come to find out 6 of the 7 of us we’re expecting baby #2! A little further apart this time (May through October) 3 boys and 3 girls! 2 of the babies are born and doing well and the other 4 are coming soon!”

It’s a tight-knit group. They share stories. Laugh. Cry. And support one another. And they don’t judge. They never judge.

The truth is, we can all use a support system in some way.  As moms. As dads. As sisters or brothers. As daughters or sons. As career folks. We could all use some people who are there when we need them, no questions asked. People who are going through the same things we are. People who understand. 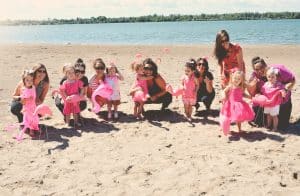 It’s not about being the same, it’s about sharing their differences.

Sure, it’s about play-dates and all that fun stuff – but it’s really about being surrounded by support.

It’s about setting an example for those beautiful little girls; we are all in this together and we have to stick together. 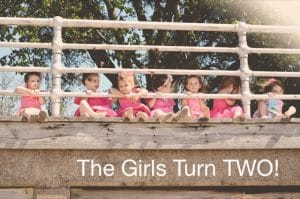 And really – isn’t that one of life’s most important lesson? One we can all be reminded of every now and again?!

We can’t wait to see what happens when the girls turn 16! 🙂

← previous post next post →
← Remembering their son, helping others, and making a difference in the world. Disney's The Little Mermaid hits the stage at Sheas - and it is beautiful! →