UPDATE: For Terry Buchwald, his wife and family – the past few weeks have been incredibly difficult. Trying times.  Their 2-year old son needed surgery – Terry  shared his story and so many in Western New York sent prayers and positive thoughts. This morning – Terry sent me a message – asking me to share the news.

Here’s what he wrote.

“We first want to thank everyone for the outpouring of love and support for our son Brooks and our family. Your prayers and positive words have truly lifted us during this difficult time. We received the results from all the tests and opinions today and our prayers have been answered!! Brooks had a cystic partially differentiated nephroblastoma, which in non medical terms is a basically very early staged Wilms tumor. This puts him in a different category which means he will not need chemotherapy!! It’s treated by removal (already done) and then he will need to be monitored starting every 3months for the first year and then once or twice a year until 5 years out. There is less than 1% chance of reoccurrence with this type of Wilms tumor. We truly appreciate all the positive thoughts, cards, well wishes and prayers for our family. God Bless!

We will continue to send the Buchwald family many prayers and positive vibes. The power of prayer is something amazing. 🙂

Terry Buchwald is well known and much loved for his music, including his Elvis tribute act.  He has been a part of the Western New York music scene for decades and has an amazing following. 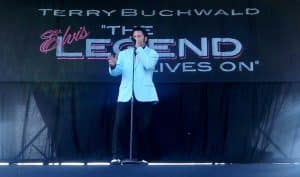 Right now, he is asking those fans and everyone else in the community – and beyond – for prayers for his young son, Brooks.  The adorable 2-year-old had surgery to remove a mass from kidney. 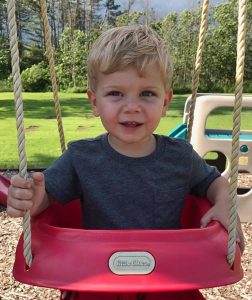 According to Terry, the mass was found by their pediatrician during a routine checkup, “After 2 days of tests and scans, they found a mass in his left kidney.” Surgery was performed on Thursday. The entire mass was removed, along with several lymph nodes. They will be sent to pathology for further testing. Terry says his little boy is tough, “Brooks had a good night, was up for a little bit this morning and is back to sleeping peacefully. We are receiving amazing care at the hospital and their focus now is pain management as he heals. We are so appreciative of and humbled by the outpouring of prayers and support from everyone. We can’t begin to thank you enough or begin to explain how helpful they have been especially yesterday. The power of prayer is so great and we ask that you continue to pray for our little guy.”

Terry told me there’s just one thing his family needs right now, “At this time we are just asking for prayers. We will know more in about a week and I will keep you updated.”

Terry has been entertaining this community for a long time – using his musical talents to make others happy – that’s a very special thing to do.

Sending thoughts and prayers to sweet little Brooks and the entire Buchwald family. Please, keep them in your prayers as well. There is no doubt about the power of prayer and as a community, it’s something we can all do together.

← previous post next post →
← As Corporal McMahon continues treatment for severe burns, the community is coming together to help... Senior Wishes does it again - this time sending Joyce on an adventure of a lifetime! →