Lots of straight woman love to take advice on various topics from their gay male friends, especially on what happens in the bedroom.  And what better person to teach her what a man wants than a sassy gay man!

Sex Tips for Straight Women from a Gay Man is a romantic comedy that takes the audience on a hilarious and wild ride where no topic is taboo and the insider ‘tips’ come straight from the source: a gay man. The play is set at a local university auditorium where the English department holds its monthly meet the authors event. Robyn (played by Jacklyn Collier) is the shy and studious moderator of the event and this month’s featured author is Dan Anderson (played by Sean Hankinson) of Sex Tips for Straight Women from a Gay Man. With the help of a hunky staged assistant named Stefan (played by Marshall Taylor Thurman), Dan aims to turn this meet the authors event upside down with a highly theatrical, audience interactive sex tip seminar. 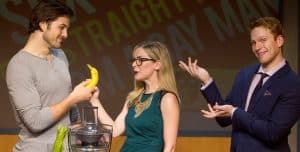 How much will you actually learn at Sex Tips for Straight Women from a Gay Man is unclear but what I can tell you is that you will have a blast and you’ll laugh the night away.

The show, directed by Tim Drucker, is based on a book of the same title, released in the late ’90s.  The play is written by Broadway producer Matt Murphy, who’s balanced his career by producing other hits!

Every one of the cast members is exactly who you need them to be. Collier gives Robyn a quirky, nerd-like personality that evolves with a surprisingly sexy awkwardness. Sean Hankinson, who plays Dan Anderson is like watching a live episode of Jack McFarland from Will & Grace.  He’s witty, smart, hilarious and over-all an exceptional actor with tons of energy.   Thurman’s portrayal of Stefan is fun to watch (WINK WINK). His accent and delivery gives the character nice levels that are appropriate.  My favorite part was the audience participation, when three women got up on stage and were asked to demonstrate a few “naughty moves”.   The crowd gets to play along and be interactive with the talented cast of actors which was welcomed and encouraged.  The rowdier the crowd, the more the show became more interesting and dynamic—that’s for sure! 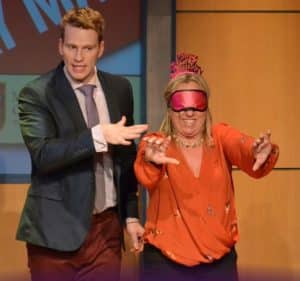 I expected the night to be filled with nothing but dirty talk, as though I was attending a Bachelorette party for one of my besties—and I was not wrong!  However, the production is much more than I expected.  The show is vibrant, fast-moving and non-stop without any intermission. The Smith Theatre is a prime venue for this type of production. (658 Main Street, Buffalo)

Don’t judge a book by its cover— see it for yourself.  If you want a great laugh—This is the show to see.

Sex Tips for Straight Women from a Gay Man plays at the Shea’s Smith Theatre through February 4th with matinee performances over the weekend.

← previous post next post →
← Amazing story of giving back, saying thanks, and making a difference. Roswell has CRITICAL need for O Negative Blood - they're asking for help! →