Benefit planned for husband and dad after horrific snowmobile accident

It was supposed to be a fun, New Year’s Day adventure. But, a snowmobile ride would end in disaster for a Springville dad and husband. Derek Aul was out with his buddies, riding the trails between Springville and Franklinville. It was a beautiful, but cold morning. Derek was in the lead, riding out front, when snow dusted up, causing poor visibility; preventing Derek from seeing a ditch.  Bonnie Martin tells me her son’s snowmobile went into the ditch and Derek was ejected and onto his back, “It knocked the wind out of him at first, he was able to stand up momentarily.  He then began to collapse to the ground where his friend Jeff caught him and gently laid him down while his second friend called 911.”

Bonnie tells us what happened next,”His wife called me to let me know my son had been in a bad accident and my husband and I left immediately to the destination of the accident.  Upon arrival the ambulance was still there and I went instantly to the ambulance and joined my son. He was being assessed for hypothermia and was on a backboard with a collar to his neck. On the way to the hospital Derek began to complain of an “elephant on his chest”. They pulled the ambulance over and called for Mercy Flight which was not available. His lung had collapsed on the right side and the EMTs were forced to stick a needle in his chest to inflate the lung. The roads were slippery and slow going as they tried to reach the hospital not knowing what might occur.  The whole ride was frightening.”

Derek was taken to Erie County Medical Center where he was assessed and treated. An MRI showed his thoracic spine was injured. Doctors performed surgery to repair his spine and fix his lungs.

Derek has been released from the hospital and is now recovering at home. He has a very long road ahead.

Derek owns his own small contracting company. He’s a hands-on builder and will surely be out of work for at least six months. 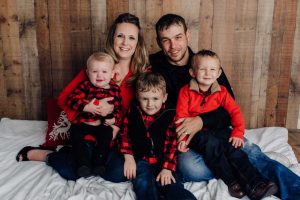 As the sole provider for his wife and three young children, Derek is worried about his future. Bonnie says, her son is not one to ask for help, but his family knows he needs it, “We just posted a GoFundMe page to see if we could help this man who has worked so hard to succeed only to face this huge setback.  The generosity, caring and love of community, friends, family and strangers in this world are beyond belief.  We hear so much about what is wrong in this world.  Why can’t the world see how many good, kind and loving people exist.  From the smallest gesture to the largest gesture, it is so unique to this time in our world.”

Bonnie says right now, her son is focused on healing, “Derek has his goal to be able to play with his children (which he misses doing) not to mention be able to pick them up. He is also afraid, just as anyone would be, that he could loose his home, vehicles and momentum with his business. Anxious about his prognosis as he is not sure how the injuries will limit him and his ability to continue to build pole barns, roofing and running heavy equipment as the injury involved a majority of his thoracic spine.”

Derek and his family have seen an outpouring of love – and they are not ones to take it for granted, “Love and caring still wins out and God’s mercy in us still prevails in spite of all the negativity that surrounds us.  Thank you to everyone and I hope God blesses each and everyone whether you send well wishes or financial support and most of all the most significant of all……all your prayers.” 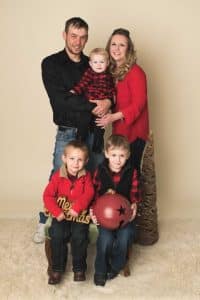 Please help this family if you can. Life has a funny way of changing things in an instant and you never know when you might need help.

Here is a link to the Gofundme for Derek and his family. https://www.gofundme.com/derek-aul-had-a-devastating-injury
If you would like to donate a basket for the event, please let us know and we will pass the information along.  Thanks!
← previous post next post →
← Children are the new face of Buffalo's homeless, your donations will help them and others! So thank you!!!!! Flashes of Hope - volunteers take pictures, capture moments & bring hope to sick children & their families →