Bills guaranteed to be brighter on the New Era field this year. Here’s why…

Mary Friona Celani
Frey Electric has been a fixture in this community for years. The work they do is nothing short of amazing!
Just recently, they installed thousands of feet of underwater marine cable and more than 500 power pedestals at the Harbor Marina at Buffalo Harbor State Park! Imagine that… 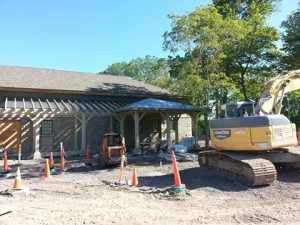 and many other huge projects around Western New York.

They get around. No doubt about it.

So, when I heard about their project at New Era Field – I wanted to know more. I caught up with Shane Freeland, Frey Electric’s Foreman at the Stadium and asked him about the project!

The project has been in the planning and design stage for more than a year, but construction took just a few months – wrapping up just in time; only days before the first preseason game on August 10th. 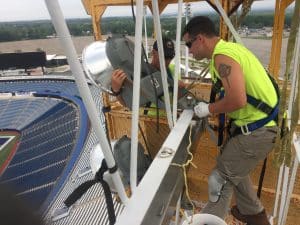 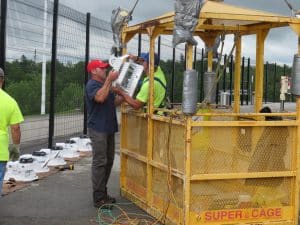 If you’ve ever been to a Bills game or watched a home game on television, you’ve seen those huge lights rising high above the stadium; 150 feet above the ground.
Consider this – the bulbs needed to be changed out.
New LED lighting was put in, “The only way to get up there was with a 150 ton crane with a basket attached. The crane operator and the men in the basket would communicate through walkie-talkies,” said Freeland. The lights have catwalks so they could walk behind the area where the lights are bolted down. A challenge was finding the right crew to go up there. Each LED weighs 75 lbs. so only a certain amount of men and lights could go up at the same time.” 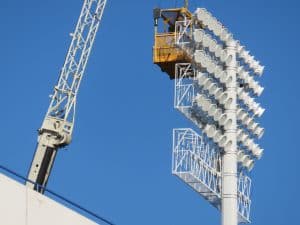 The Bills are following the lead of other  NFL teams who have already switched to the LED lights. Freeland says they make a very big difference, “They definitely improve the lighting in person, but they also make the television broadcast look better.”
They also use a quarter of the energy as the older lights and they require much less maintenance; saving money all around.
Saving money and helping the environment; that is something the folks at Frey Electric believe in wholeheartedly, “It is always great to work on projects that will help the environmental footprint in a positive way. Using less energy will help relieve the increase of usage on the grid during games/events. Additionally, with less maintenance, the lights will have less waste.” 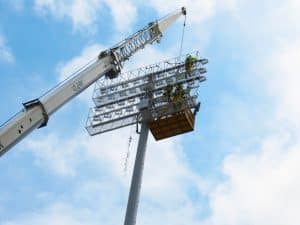 But wait. There’s more.
The lights are brighter, too. 30% brighter! 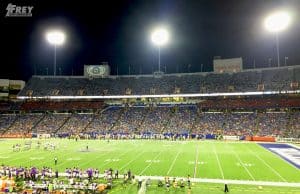 There’s no doubt, it was quite the project. Each fixture angled just right to maximize the light. Each pole carefully put in place. All with quite a deadline – before the first preseason home game. Done. Done. and Done!
So, the only question that remains unanswered – when will the Buffalo Bills bring our community a Superbowl victory?!
No way to know that – but whenever that might be – those lights will still be shining – just as bright!
(Photos provided by Frey Electric)
Check out this video put together by the folks at Frey Electric
← previous post next post →
← You guys - Kaeden started school today! The little boy who was mauled by two dogs - is off to the 3rd grade!!! Prayers for sweet Anastasia - as we continue to shine GOLD for Kids with Cancer. →