I know … how adorable!

The Aquarium of Niagara on welcomed the first harbor seal pup born at the facility in 30 years.

Eight-year-old Zoey went into labor after nearly eleven months of gestation, and the pup was born just after midnight on Thursday.

Aquarium staff said the delivery was seamless, and both mother and pup are doing very well.

Zoey – who was rescued and deemed non-releasable, has been at the Aquarium of Niagara since 2012 after undergoing surgery to correct a severe inner ear infection. The pup is sired by 9-year-old Pickles, who joined the aquarium in May of 2016 from SeaWorld San Antonio. 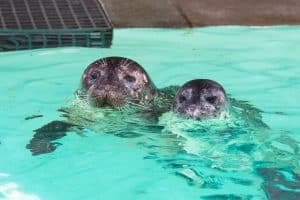 “It is such an amazing experience to see mom and pup begin to bond immediately after birth,” said Richelle Swem, curator of animal care. “Gender will be determined during a veterinarian examination in the coming weeks.”

Both pup and parents are currently residing in Rescue Harbor, among other members of the marine mammal collection. In coordination with facility technicians, animal care staff have ”pup-proofed” the habitat to ensure the health and safety of the newest addition.

For ore on the Aquarium – their hours and prices – visit their WEBSITE.