Wow. Imagine falling 75 feet and actually living to tell about it! It happened to a Buffalo man who is still recovering, and will be for quite a long time. Still, Chris Travis is very happy to be alive.

It is an amazing story of survival. A story of the human spirit and a fierce will to live.

33-year-old Travis was hiking the Niagara Gorge – just like he has countless times before. It’s one of his favorite things to do and sometimes hits the paths there once or twice a week. 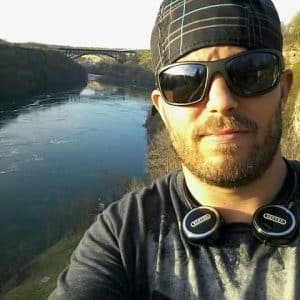 But this time was different. On May 18th, Chris Travis fell 75 feet and was severely injured. He spent weeks in ECMC and is now home recovering. It is a long road and it will not be easy for him, but Chris wanted to share his story and thank those who helped him.

It’s a trail he knows pretty well. Chris says he’s hiked the gorge more times than he could count. On this day, he was walking along the trails with some friends when all of a sudden something went wrong, “I tripped over what I think were some tree roots and I went over. I was walking one second and then falling.”  Chris goes on to say that he doesn’t remember all that much as far as what happened next,  “I don’t remember much at all.  I landed on my feet, I think and then I was on my back. I was up against a tree. I fell 75 feet or so, but was just three feet from falling another 150 feet. That tree that I was leaning against saved me from falling or rolling off the next part of the cliff. My friends up top were freaking out. I could hear them yelling but it is really all a blur. I knew at that point that I had a head injury and my legs. I crawled. I army crawled about 50 feet or so. I wanted to get away from that second fall. I checked my pockets and had my phone. It wasn’t broken so I called 9-1-1 and then called my friends up top. They had called 9-1-1 too. I could hear my friends yelling to me. I don’t remember much more. I was in shock. It’s like a blur. At that point I was thinking – I have a little boy. He’s 8 and that’s all I was thinking about. That’s all that was going through my head, making sure I was going to make it. I had to make it for my son.”

Authorities arrived up top pretty quickly, but Chris tells me the rescue itself took some time, “It took a while. It was dark by the time they got there. I had a lighter, which helped them to see me. It took them a while to get to me. I could see their flashlights. It took a while. I was in pain. But also in shock. They put me in a basket. And then, the craziest thing – there was an old elevator shaft and that is how they got me up. It worked. This old elevator, who knows how old it is, worked and that’s how they got me up top. It was the Niagara Falls Fire Department and one New York State Trooper was there, too. He was a family friend and actually called my family to let them know what was going on. They talked about sending me in Mercy Flight but I guess decided that an ambulance was fine because they put me in an ambulance and sent me to ECMC.”

These are photos of the actual rescue. Photo Credit: RobShots 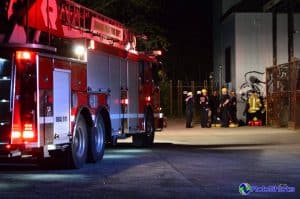 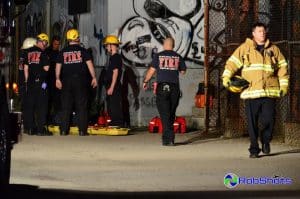 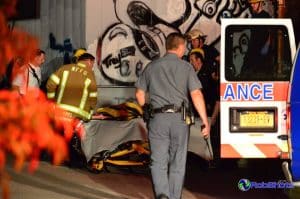 Chris had several injuries, but his legs took the brunt of the fall. It’s been a very difficult recovery so far, “The injuries are severe. I have a broken left foot. A broken left leg. I have pins in my heal, my foot and my shin. My talus bone (the bone that holds the foot and leg together) actually blew right out. It’s actually gone, still down there in the gorge somewhere. It blew right out. There is nothing there right now, but at some point they will try and replace it somehow.  I had some head injuries too.” 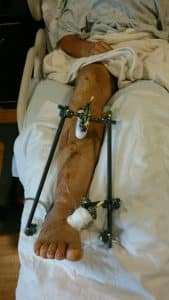 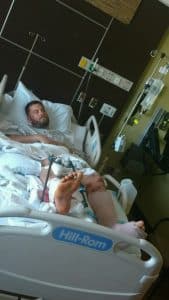 Chris spent several weeks at ECMC, but is now home recovering. It will be a very long and painful process, “I’ve had three surgeries so far. I will need more. Multiple surgeries. Up to ten if things go well. That is best case. The biggest concern right now is infection. If it gets infected it will be terrible. I have a nurse that comes to take care of things so hopefully things will just heal and go along as they are supposed to. It will take at least a year before I can even think about seeing if I can walk. They sent me home from the hospital on May 30th. They said I was better off going home to heal for a few weeks until the next surgery, less chance of infection. I have a nurse that comes every other day to clean wounds and change the wound vac.” 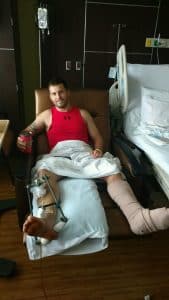 Chris says he is surrounded by an amazing support system; especially his girlfriend, Kelli. He also has seen remarkable doctors, nurses, and others and wants to thank each and every one of them.

No doubt, Chris has a very long road ahead and as a construction worker and contractor – he will be out of work for a long time. His girlfriend has set up a gofundme fundraising page  to help with medical and living expenses during this time of recovery.

It could have been so much worse and Chris knows that. He’s thankful to be alive. He tells me that he is not used to asking for help and doesn’t really like to but he is overwhelmed with the support he’s received so far, “I don’t like people to help me. But, it does feel very good knowing all of these people care and even in these hard times, it’s tough times for everyone and it’s amazing  that so many people just care. I am so grateful.”

← previous post next post →
← All clear given after Artpark partially evacuated after police dog "sat down next to speaker and would not budge" Yes, you can rent an inflatable Tiki Bar! Who knew... →