It was a warm July evening, when Hans Boxler, Sr. went out to do what he’d been doing for years; feed the animals. His animals. He’d push some hay and throw some grain through the fence. It was standard practice.

Tragically, it would be his last time. Boxler was trampled by an antelope that somehow escaped its pen. Barb Dominesey is the General Manager at Hidden Valley. She’s also Hans Boxler’s daughter. She hasn’t talked about her father’s death publicly, until now. “He died doing what he loved to do,” Barb told me in a recent telephone interview.

Often stopping to try and hold back tears, Barb talked with me about her fathers’s death, but more importantly about his life, “He lived two lifetimes in one life.” He was a man of character, always giving – to the community, the fire department, charity. He was an iconic figure in Varysburg which seemed obvious by the amazing show of support after the accident, “I heard so many stories during the calling hours. People stopped, took time. They told me about times he helped them. He really cared. He really cared a lot,” Barb recalled.

He cared for people and for those animals, like Sampson the Water Buffalo who was one of his favorites.  Barb said that adoration was obvious to everyone at the safari, “He’d often say those animals were his kids.”

Boxler had eight human children, too. They knew two things for certain after their father’s death. First, he wanted his last goodbye to include his beloved horses, Chip and Chuck, “He loved those horses. We knew that was his wish, to have them there for that last ride.” Barb said, “It was so very emotional to see that.”

Second, they knew he wanted his legacy to live on through Hidden Valley Animal Adventure. So, that is the plan, with Barb in charge. And make no mistake, Barb knows those often muddy, worn shoes that she’s left to fill are enormous, “Animals were his life. He grew up on a dairy farm. He went through hard times, he worked very hard. He loved animals ever since then. He worked non-stop and now it’s my turn.” There has always been a huge emphasis on safety at the park, but now,  a plan is in place to have even more safety training, working with inspectors, veterinarians and other experts. 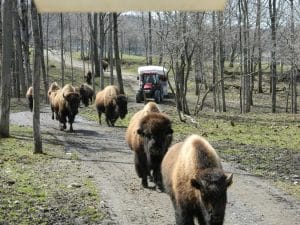 They want visitors to the park to continue to enjoy what Boxler built. The up-close and personal look at nature in all its glory. They want folks to love their tour of the 63 acre park showcasing some 400 animals in the safety of the buses and trolleys.

Of course, Hans Boxler, Sr. knew that risks came with his life, but Barb said it didn’t stop him. It was his life’s journey and he treasured it. For the family, it has been a very difficult journey.

Their focus is on moving forward, preserving the legacy of the family patriarch. Barb says she has accepted the fact that they will never know exactly what happened that July night, but what they do know is that he was happy doing exactly what he wanted. He was proud of his work and his legacy. Barb said her dad respected those animals and cared a great deal for them, “He absolutely loved his work. At the end of the day, I don’t think he would have changed a thing. He would do it all again. Even everything he did on that day he died.”

← previous post next post →
← The Ultimate Buffalo Diva! Caitlin Koch talks Nashville, being a woman in the biz, and her upcoming tour! →