Important reason to write something that’s not good news, but rather tragic news.

So, I went back and forth on this. Like so many folks, I am just heartbroken by the news of the little boy who died while playing in the snow. It’s unthinkable, isn’t it? I mean – he was doing something most of us have done a million times. I’ve done it with my children and never – NEVER – thought it was so dangerous that it could kill them.

That being said, this blog was meant to celebrate Buffalo. And we do. We have so much to celebrate.

But, I felt an obligation of sorts to at least write something up as a reminder. So, no – it’s not happy, inspirational news – but it is important. So important. Life-saving important.

Trooper James O’Callaghan is the press go-to guy for the New York State Police. I asked him for his thoughts this morning. For something I can pass along to all of you. It’s a tough reminder, but an important one. Trooper O’Callaghan says this is a difficult time, “It is always devastating when a family loses a child. As a parent we let our children engage in activities that can be dangerous that we take for granted.” We do, don’t we?! We let them build forts made from snow and sand, never thinking about the tragedy that could occur as a result.

We have to think worst case scenario – we just have to.  It’s a fine line sometimes, because of course we want our children to have fun – but at the very least – we have to let them know that it could be dangerous. We have to at least talk with them… put it into their mind… like the dangers of crossing the street, playing near a pool, we have to tell them. Trooper O’Callaghan says that is our responsibility as parents, “Snow is very fun to play in, but we need to talk with our children on the dangers of building snow caves and walking on frozen bodies of water.”

Maybe they can build a cool fort without a roof – something that can’t cave in on them – something even smaller than this. Or better yet, maybe just stick to building a snowman. 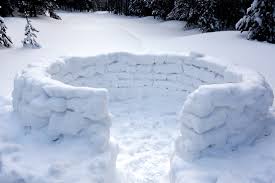