Kirk Jones, one of the only people to go over the falls and survive, found dead. Why I’m NOT surprised.

I am not at all shocked.

Kirk Jones survived that plunge over Niagara Falls back in 2003. The 180 foot fall over the beautiful and terrifying Horseshoe Falls proved to be an invigorating experience to the self-proclaimed daredevil.

The only person EVER to go over the falls, wearing only the clothes on his back, and survive.

It was an amazing feat, no doubt about it. It made national news. I reported for the Today Show live from the falls. It was a huge talk about.

Kirk Jones got his 15 minutes of fame.

I wanted to know why he did it. I felt like it wasn’t an accidental fall – so I pursued an interview with Jones. After a few calls, texts, and emails – Jones agreed to a sit down interview. The only problem was that he was staying with relatives in Portland, Oregon.

So, I was on a plane headed there – meeting up with a photographer at our NBC affiliate in Portland. We headed to the home and interviewed Jones for a few hours. 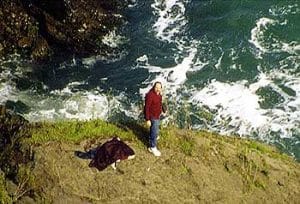 He described what it felt like going over – a black hole of nothingness.

He was a very dramatic man. He felt a real sense of pride for his survival. His stunt.

He showed me the clothes he’d been wearing; all shredded from the rocks and rapids.

And he said something that amazed me. He said he’d do it again.

I never really thought he would, but I wondered.

Now, it seems he did try it again. Unfortunately, this time he did not survive.

The New York State Park Police say he did.

In a press release, the Parks Police stated that a body was pulled from Lake Ontario by the Coast Guard. The body was identified as Kirk Jones. They went on to say this, “Investigation reveals that Jones was in the Niagara Falls area on April 19, 2017 and may have been attempting a stunt by going over Niagara Falls in a large inflatable ball. The ball was initially located in the rapids above the American Falls empty. The attempted stunt was unsuccessful which resulted in the demise of Mr. Jones.”

Back in 2003, Kirk Jones was one lucky man.  He thought that stunt would change his life; make him rich. It’s too bad he didn’t just appreciate that he lived to tell about it. I think, perhaps, he underestimated the true power of the mighty Niagara Falls.