UPDATE: Well.. how could we not share this picture we found in the Sun Newspaper?! Look at how adorable Lindsey Shookus is! She’s the Williamsville native now dating the mega-star. The actor couldn’t keep the grin off his face as he was spotted leaving the Beech Street Café in Los Angeles. Looks like they’re having fun! Good for them. Keep an eye out for the couple in Buffalo – you never know.

We aren’t big on gossip, but since E! reported it – it’s basically gospel so we’re going with it!

Apparently, Ben Affleck is dating a gal from Williamsville. Her name is Lindsey Shookus.

According to Heavy.com – Shookus was born in 1980 in Williamsville. Her father, Robert Shookus owns Nelson Heintz & Shookus of Buffalo, which is a manufacturer’s representative for electronic consumer products and housewares.

Here are some more tidbits about Ben and Lindsay from E! 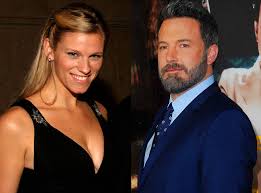 Here are five things to know about her:

1. She’s a Veteran SNL Producer: Shookus started working as an assistant producer in 2002 and was promoted over the years. She now helps oversee casting.

2. She’s Been Married Before Too: Shookus wed Kevin Miller, a former SNL producer, in 2010. They met on her first day at work on the show.

3. She’s a Mom: Shookus and her ex are parents to a daughter.**** 4. She Grew Up in Upstate New York: Shookus went to high school near Buffalo and graduated from the University of North Carolina at Chapel Hill.
5. She’s a Powerful Lady: In 2015, The Hollywood Reporter named Shookus one of its “Up-and-Coming Execs 35 and Under.”
Can’t wait for the first sightings of Ben and Lindsay in Buffalo!
← previous post next post →
← Her dream is to end Alzheimer's Disease Lakefest Niagara, Mercy Flight's largest fundraising event - set for July 22nd. →