Love is in the air at The Buffalo Zoo! (Again)

After spending some time apart, the Buffalo Zoo has reunited polar bears, Luna and Sakari, just in time for Valentine’s Day.

Luna and Sakari were separated in mid-October as the denning season started. Although it was not expected that Luna would be pregnant, it is around that time that female polar bears build maternity dens. It is in these dens where they will give birth to cubs and nurse them until spring.

Polar bears are solitary animals and male polar bears provide no care to their young. In fact, they can be a danger to mother and cubs. Therefore, the separation was perfectly normal. 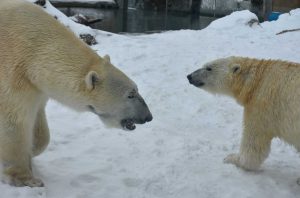 Of the separation and reunification, “this is a core component of our mission and we are proud to be part of the Species Survival Plan to support this threatened species,” said Zoo President/CEO Norah Fletchall, adding “although Luna was not pregnant this year, the chances become greater each year with sexual maturity – not to mention that it is good practice for our staff to work within the framework of both of the bears’ natural
life cycles.”

The Buffalo Zoo introduced the bears to one another in early 2017 during a planned Valentine’s first date. The special date consisted of “love-themed” snacks, keeper talks, and enrichment throughout the day. This weekend marks the first anniversary of that special date, and the Buffalo Zoo keepers are at it again. Not only will the Zoo recognize the anniversary this weekend, it will also take the opportunity to acknowledge that a first anniversary is symbolized by paper. Through social media, the Zoo will be posting positive messages to support paper recycling, and reduced plastic bag consumption; tips will also be offered for consumers to reduce their carbon footprint that is a contributing factor to the bears’ natural habitat challenges.

For more on the zoo’s hours and rates, head to buffalozoo.org

← previous post next post →
← Have you seen Dolly? She's missing from her Wilson home! Local shop is helping sick kids - and you can, too →