Owner of Mikey Dee’s says village officials are responsible for that massive sinkhole. Here’s BOTH SIDES.

The story of that epic East Aurora sinkhole started earlier than you might think.

It was back in March when a small hole opened up and things went from bad to worse. The hole was about 20′ X 30′ – and growing.  Mike DeJoseph, who owns Mikey Dee’s Cafe’ and Catering, said village workers came and filled it. It seemed fine, until anytime it rained  – when it would return. And grow.

Mike says village officials dragged their feet. He lost his parking lot, couldn’t get deliveries. And that was just the beginning.

Then, ten days ago, village workers came and did a temporary fix according to Mike, “They came and put a band aid on it and said it would be fine until spring. They filled it with stone and covered it up. They covered it up, but I knew what was going to happen.”

It was clear to Mike that Friday’s heavy rain was causing problems – he said folks from the village said it was simply settling and things would be fine.  Saturday morning – the hole was even bigger. They put more stone in. 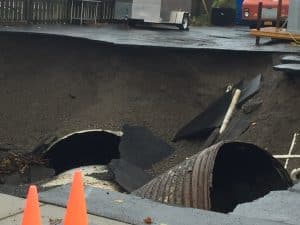 Then Sunday evening – around 9 p.m. – Mike got a phone call from a neighbor of the restaurant – he heard a loud noise and knew something was wrong.  When Mike showed up fifteen minutes later he couldn’t believe how big that hole was. “That hole was massive. It was like 40 by 60 and at least 20 feet deep. I called the police and fire department. Everyone was shocked. They were shocked at the size of it, but to be honest not surprised. Nobody was surprised. We knew – everyone knew – it was going to happen.”

Mikey Dee’s Cafe’ and Catering was immediately closed down. The village closed the business down and cut all power to the building.

For Mike – who’s two year anniversary in business comes tomorrow – things have been great with the restaurant. He says business has been booming and he and his nine employees have gotten into a groove.

Now, it’s a waiting game – and Mike says it is a disaster, “I always have a plan. A plan for everything. Today, I don’t have a plan. I have to just wait. The village – The Mayor especially – is not helping. He’s basically said nothing to help,” Mike goes on to say, “The village caused this. They put me out of business. They cost me my life savings. I’m at a loss for words right now. The community outpouring has been amazing and other businesses too – but not the village. Not at all.

And to make things worse – Mike just told me that his insurance is denying claims on all of the food they’ve had to throw out. Apparently, there is a clause in the policy that states if the municipality cuts off power to the building – nothing is covered. Nothing. Not lost time. Not wasted food. No help for those 9 employees.

Mike says he hopes the town officials step up and do the right thing. Right now engineers and other officials are checking out the foundation, looking for any structural damage. But for now, nobody is allowed in that building.

In a phone call, Village Mayor Allan A. Kasprzak told me he sees things a bit differently.  Mayor Kasprzak knew of the problem and said the Department of Public Works has been monitoring the situation as officials tried to determine who was responsible for the repair costs,  “It’s been going on for a couple of months but a determination had to be made because it started on private property.” Then, says the Mayor, 3 or 4 weeks ago, records showed that the village was at least partially responsible and they started to put a plan in place for repairs. Village DPW workers packed the hole with dirt. They tried a few temporary fixes to get them through short-term as they worked on a master plan.

A State of Emergency was immediatly put into place. The Mayor says he is not aware of anyone from his village going out there over the weekend, prior to the collapse.

I asked the Mayor who he feels is to blame, “I don’t want to cast blame on anyone. If people are looking for blame, we would all be Monday morning quarterbacks.”

And here’s the next step – The Village will be paying the total cost of the repairs. For now.

They’re paying, said the Mayor because it is an emergency situation that has to be fixed now.

What happens next – the Mayor wouldn’t say. I asked if the business or building owners would receive a bill from the Village, “I can’t really say. It would be up to the village board. It would be a vote and I’m only one of seven.”

I asked what his vote would be, he said he didn’t know right now.

Mayor Kasprzak admits – he does feel bad for all involved, “It is a new situation. My first concern is for safety. I’d like to be able do to things within seconds, but this is something we’ve never seen. We can’t snap our fingers and go. We are working on it. We are.” 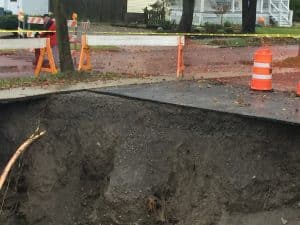 For now – it is a waiting game as repairs continue. The old pipe will have to be replaced and things should get back to normal. Who pays how much in the long run – that is still up in the air.

Here is some amazing video of the sinkhole from above – courtesy of Dan Oshier Productions.

← previous post next post →
← YES THEY DID - Star 102.5 has flipped to Christmas Music! Young mother of 2 little boys - is battling cancer AND they recently lost everything in an apartment fire. She needs help. →