Channel 4’s Don Postles says it’s great to be back in the anchor chair. So, is it a new Don Postles? Maybe!

It’s been a long few months for the Channel 4 anchorman. He’s been off work while recuperating from an injury, “I had some cracked ribs and ultimately I had some complications and thankfully I was in the hospital so they were able to catch things quickly and get me better. I ended up with pneumonia, too. It wasn’t fun. It’s a long time to be in the hospital.” A long time indeed Postles went on to say, “I was in the hospital all that time, for a few months, but I had fantastic nurses over at Millard Suburban Hospital. They were terrific.”

Even with those terrific nurses and wonderful staff, Postles says he was chomping at the bit to get back to work, “I missed big stories. It’s hard. You know I missed the Officer Lehner story which was huge and I also missed election night and I have always enjoyed working on election night so I missed that and it was hard sitting there and watching from a distance.” 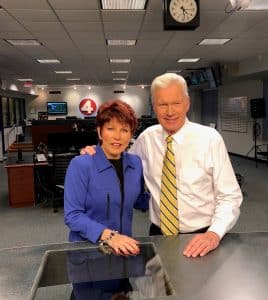 Postles says what matters now is that he’s healthy and back in the anchor chair, “I feel fantastic. I really do. I have to thank everybody. I have to thank Jacquie. She’s wonderful. You know she sent me cards and some of my favorite peanuts.” He says everyone welcomed him back with open arms, “It’s great to be back though. I told my News Director, Lisa Polster after my first show back – that it felt like I never left.”

Now it’s back to business as usual – sort of, “Well, I do have this different perspective now. I’m not going to get mad at my producers for doing something. I’m just rolling with the punches.”

With that I asked if this was a new Don Postles – to which he answered with a laugh, “I suppose so. At least for now. At least temporarily.”

One thing is certain in this community – when you’re down and out, the folks here really care. They prove it time and again and this was no exception, “You know, the people are terrific. I was flooded with more than 100 cards from fans which is really overwhelming and very much appreciated. I guess you earn a spot in Western New York hearts after 41 years of doing this. I truly do appreciate it.”

← previous post next post →
← It's official. Harvey Weinstein's honorary degree from UB has been revoked! Only in Buffalo can a streaker become such a symbol of unity - and we couldn't love it more. →