Pat Proctor is just getting over what he calls a “Wallenda Hangover!” And he means that in a very good way. Pat and his business, Rainbow Air were a big part of the recent Erindira Wallenda stunt over Niagara Falls.

Rainbow Air has been Pat’s family business since 1995. He has been overseeing day to day operations since 2004. The helicopter sightseeing company takes tourists, or anyone, on a ride high above the stunning Niagara Falls. I caught up with Pat and asked him a few questions. 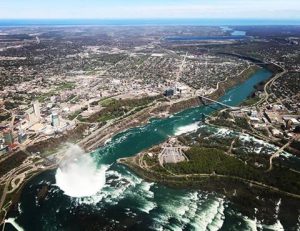 Do you ever get sick of those spectacular views?

“If you get sick of the views, it’s time to retire! So the answer is no!” 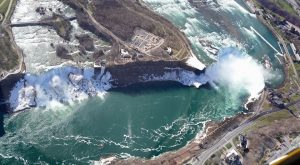 How do customers react to the views?

“The look on their faces getting off the helicopter tells the story itself! Their look can describe a million words of, shock, OMG, what the heck just happened and let’s do it again!!”

What celebs have been on board?

“We’ve had Buffalo Bills players to Minor League All-Stars to actors (Kevin Sizemore) to musicians, Gaven Rossdale (lead singer of Bush) to WWE wrestlers like
the late great Eddie Guerrero. The list goes on and on but it’s hard to keep track you just hope everyone, celebs or just tourist enjoy! UFC fighters (Rashad Evans Niagara Fall’s own) We actually have been the center of a couple big time shows, Long Island Medium and Fox Sports, Road To The Octagon. That’s exposure you can’t even put a price tag on.” 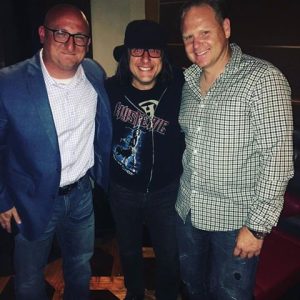 What was it like to help with the Erindira Wallenda stunt?

“We did do the filming for the made for TV event. It was awesome to be apart of it just due to the fact that it’s a close up view of the most intense of the 2 Falls and “stunting” has only been done legally twice over the Falls (both were the Wallendas). To be apart of history and capturing it from our aircraft is amazing. We re-built this company from the ground up and just to be trusted and considered to make sure the shots needed to be captured are on our end means we’re
headed in the right direction.” 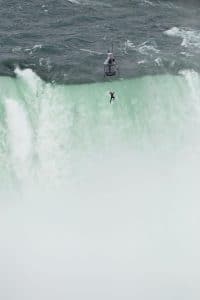 What can folks expect on a tour?

“We will cover both the US and Canadian sides of the Falls. The upper rapids and lower parts of the Niagara River. We do enter Canadian Airspace legally and
no passport is needed. That’s a top 3 question always asked. The view on a clear day, you can count the windows on the buildings in downtown Toronto and the City of Buffalo is a stones throw away. Takes about 10 minutes per trip and covers a 20 mile area of both International Boarders.” 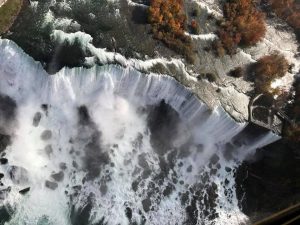 You’re a big supporter of the area, tell us your hopes for a Niagara Falls comeback?

“It’s a simple solution that has been a problem for over 50 years, it’s putting more attractions on the outside of the State Parks and putting those attractions in the City of Niagara Falls. We have to get away from the saying, “It’s complicated” and actually – Just do it! Brightening up the Downtown area and making it more inviting with a more serious approach of having an Entertainment District like Buffalo is doing or other major cities have. Making this place a Family Oriented Destination is key. After the Fireworks at 10 p.m. there’s literally nothing for families to do. The water never stops flowing over the Falls, neither should the options on what’s next to do!

What is the deal with the belt? Tell me!

“LOL!! The title belt is from 2008 when I won it on Ebay. As a kid growing up I loved the Ultimate Warrior and that was his style title belt. I had it delivered to
our office and the day it came in the mail I had it laying out. A BIG Russian gentleman came up to our ticket window and got sidetracked looking at the belt and asked to see it. He started roaming around our property and these kids across the street at the hot dog stand saw him and came running over thinking he was a real WWE Wrestler. I kid you not for about 45 minutes people took pics with this guy. So I decided to leave it at the office and then some celebs saw it and wanted to take a pic with it. So the joke goes, “I heard so and so flew with you today, did you get them with the BELT?” Nik Wallenda wore it after his walk and then his wife graced the belt as well 5 years later. It’s slowly becoming an attraction in its own right haha!

Rainbow Air will take you high above the falls for a view unlike any other. And those views – are stunning. Absolutely breathtaking. If you get a chance, check it out. You may have seen the falls hundreds of times, but not like this. 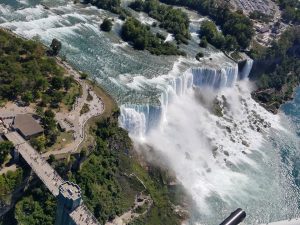 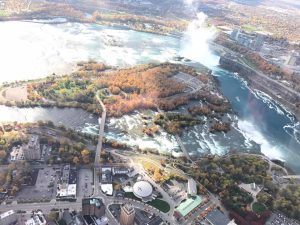 You can find more information on times, costs and details of the tours at rainbowairinc.com.

← previous post next post →
← GAME OVER! They did it. 11 days and ONE MILLION DOLLARS! Mother and baby injured after firework malfunctions. Charges filed. →