Another year has passed since that terrifying and devastating day.

There will be more tributes, reflection and prayer as we remember those lost that day. It still hurts so much.

It’s impossible not to sit and think about where you were and what you were doing that day.

It’s hard not to think about what began as a beautiful and sunny morning.

It’s hard not to think about the people who lost so much that day – those who lost everything.

Remembering the horror of 9/11 is so important because forgetting about it would be a tragedy of its own.

Each year – The Western New York Families of September 11, in partnership with the American Red Cross, honor the memory of the lives lost in the September 11, 2001 attacks with their annual flag tribute on the front lawn of the Clement Mansion on Delaware Avenue.

An individual flag has been placed on the lawn of the Western New York Chapter headquarters of the Red Cross to represent each of the nearly 3,000 people who lost their lives in the attacks, including a special section honoring those who had connections to Western New York.

In addition to the flag tribute, the WNY Families of September 11 will host a memorial service at the Clement Mansion at 6 p.m. on Friday, September 11, 2020.

“We created this tribute so that Western New Yorkers can remember every year how many lives were lost in the attacks of September 11, 2001,” said Leigh Macadlo, a member of the Western New York Families of September 11. “We want to remember each innocent person whose life was ended so abruptly and tragically, and honor the extraordinary sacrifice of responders who gave their lives for others that day.”

For many years, as a reporter, I covered this tribute – and it is both beautiful and heartbreaking. I’ve gotten to know many of the family members, all salt of the earth people.

The ceremony is beautiful and so is the sea of flags. Volunteers set up nearly 3,000 flags on the lawn of the Clement Mansion to honor the memory of the lives lost on September 11th.

An individual flag is placed on the lawn to represent each of the people who lost their lives in the attacks on September 11, 2001, including a special section that honors those who had connections to Western New York.

There are always connections to WNY. One that I often think about is Sean Rooney.

His family is amazing. His sister. His wife – Beverly Eckert (who has since died in crash of flight 3407). I covered the memorial service for Sean just weeks after the terror attacks.. It was so heartbreaking. I talked to Beverly about how she was on the phone with him as the World Trade Center – where he was inside working – was burning. It was unfathomable to me. She was so strong. And brave.

And perhaps the story that sticks out most to me is the Lynch Family.

Didn’t know anything about him. I just knew he was a hero.

2 years later, when I went to New York to cover the 2 year anniversary of the attacks – I spent the day with Michael Lynch’s family (many live in WNY still). From his young niece who read his name during the ceremony, to his incredible sister, Kathleen, who had such pride for her brother – to his dad, Jack – who was heartbroken but determined to somehow find the remains of his boy – which he eventually did. The entire family was so wonderful. So strong.

Those two days in New York were a complete eye opening experience for me. I wasn’t sure what to expect.  People – so sad and heartbroken. It was only two years later – so many wounds – so much anger – bitterness. Still fear, too. It was one of my most difficult assignments.

I felt so grateful to be spending time with the Lynch family.  I remember how proud they were of Michael. I was and still am inspired by that.

Michael Lynch was just 30 years old. He had a lifetime ahead of him. But he didn’t think about that – he just ran into the burning high rise. Ran in there. Can you imagine? He ran IN. 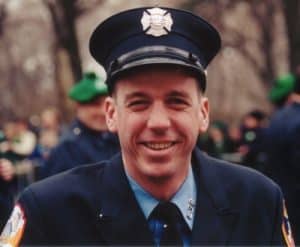 I have two babies born way after 9/11. I know they’ll learn about it when they get older – but, I do plan to talk with Emma later today when she’s home from school. Not to put fear into her – obviously – but to teach her about resilience, determination, pride, and heroes.

As difficult as it was – I am – without a doubt – a better person because I covered these stories.