Special accessory worn by Shield at Bills ceremony was made with love by local artist.

For Paul Roorda it has been a long few weeks.  You may not know Paul or his business – Park Avenue Imprints – but you surely know his work. He is the designer behind the Officer Craig Lehner shirt that has been flying off the shelves. He doesn’t have any final counts yet – but he does know he has made and sold an awful lot of shirts. Like, a lot of shirts.

Paul calls the entire thing – a once in a lifetime opportunity.  He got the call from the folks at WNY Heroes, “You wish you don’t have to do stuff like that but it’s cool that they think of you to do something like that. That you are so thought of to capture the spirit of it all and it’s amazing to be a part of it.” 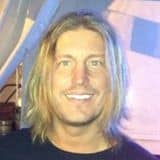 It was a long few days – and an amazing few days. Paul says it was a bittersweet opportunity that meant the world, “I worked overnight Wednesday into Thursday and Friday it went to press. I changed the design right up until we went to press.”

The shirts are beautiful and people are loving them.

Paul’s work went beyond those shirts – making these special neckerchiefs. He was asked to make ten of them for the entire K-9 unit, of course, including Officer Shield, “I decided to embroider them and I love the way they came out. They were beautiful.”

They were made for the team to wear on the day of Officer Lehner’s funeral.  Today, Shield wore that very special accessory as his late partner was honored. 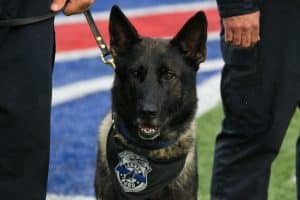 Wearing that beautiful neckerchief with his embroidered badge right there.

Made with love. Buffalove.

It’s something Paul will always remember.

Paul hopes the money raised will help heal in some way. He’s proud of the work he’s done – proud too of his community.

Eight days on and off of printing. Eight days. People love the shirts and what they represent. So many folks felt helpless and this was their way to show their support and make a difference, “We talked about this so much and I honestly don’t think anybody could quite put their finger on exactly why they were so impacted by this. It’s impossible to verbalize but people really were greatly impacted by this.”

Paul was so busy working on this that he brought in help to his shop just to get caught up. He was amazed by the support, “I’m never gonna forget this week. it was so worth it. I will never forget. To be on and off on press, it was just something that I won’t forget.”

This community is so amazing. And that is because of people like Paul Roorda – who put his business aside for an entire week.

“Personally and professionally, to be asked to be a part of something that is just larger than life really, it means so much. I can only say I did the best I could and I will never forget any of it. Doing this for Officer Lehner was something special. Something very special.”

They have a limited amount of shirts left – so contact Park Avenue Imprints if you’d like one. The neckerchiefs are not for sale.