Kevin O’Neill was my cubicle neighbor at Channel Two! He’s one of the nicest, sweetest, and yes – funniest guys around. I hope I’m not ruining his funny guy reputation by telling you that he is also a very caring human being. When I was off work for six months after my daughter’s accident – Kevin checked in on us on a pretty regular basis. He’s kind like that.

I caught up with Kevin recently to see how life is treating him – and he was nice enough to answer some questions for this Spotlight Story.

A: Yes I am! They say opposites attract. That may be true, but ultimately I’ve discovered people are happier long term with somebody that is similar to them in personality. My wife has similar interests and, like me, is quite adventurous and social. Jen also might be the single funniest person I’ve ever met. I’m very happy. We laugh a lot every day. Her being drop dead gorgeous is a plus. 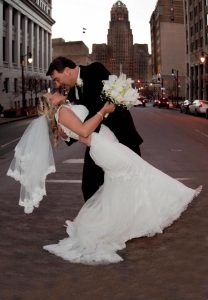 Q: I know you’ve recently lost your father – I’m so sorry to hear that. How are you doing?

A: Technically, my step-father. I call him my dad though; he married my mom when I was a little boy. He certainly was the most influential man in my life, and I’m thankful he was my role model for 40 years. He was a steady guidance force for my family for so long. He was very quiet and mild-mannered but was truly the most intelligent and strongest man I’ve ever known.

Q: What are your top three date night spots with Jen?

A: Hard to name 3! We really don’t like repeating too much! We are all about adventure and trying new spots.
1- anywhere overlooking water
2- anywhere with string lights, good music, and a well-made margarita
3- anywhere with the football game on that’s filled with fans and serves a nice plate of wings

Q: How has your job changed since you started?

A: I’ve been roaming around WNY since the mid 90’s, so that’s before the internet became a thing! I started with nothing on my desk but a phone book, a phone, and a big desk calendar I used to schedule locations. The internet has certainly made it easier to scout out locations and events, however there are a couple drawbacks. I’ve noticed that manufacturers are more hesitant to allow cameras into their facilities. When I started, companies liked the promotion and the boost in morale of being on TV, but before the internet they didn’t have to worry about competitors in other markets or other countries potentially seeing the video. I want my live shots to be very visual, so I have to balance giving viewers that “behind-the-scenes” look with not showing some things the company doesn’t want on the interwebs.

Q: Do people still call you the Why Guy? And does it drive you nuts? ?

A: Rarely. I haven’t used that moniker since 2006. Antowain Smith was the Bills leading rusher. Chris Drury was the Sabres captain. That’s how long it’s been! If they call me that it usually means that they’re loyal Channel 4 viewers who are stuck in the past a little bit. That’s OK though! I’m flattered that they liked my morning adventures! I usually remind them that I’m still on in the morning, and they’re missing out on a lot of fun if they didn’t switch when I did. WGRZ is top-rated 6am-7am, when my two segments are on. That’s because we have all the news and weather they need but we also take time to celebrate WNY. Waking up early for work stinks; we try and start people’s days with a smile.

Q: So you decided to go back to school to become a meteorologist- why? And what was the process like?

A: I got an interest in weather models and forecasting conditions for a week ahead because I schedule my own shows. For example: if I’m going live at a pumpkin patch the next week, I’m going to pick a nice dry morning. If I see rain ahead, then I’ll schedule an indoor show. Over time I got to be really good, and developed a real passion for getting it right. I told WGRZ that I was pursuing certification and they were 100% on board. I chose Mississippi State because it’s a well-respected curriculum with many notable grads (Chesley McNeil, Jennifer Stanonis, and almost 2,000 other meteorologists throughout the country). It took 3 semesters a year, for 3 years. Textbooks, homework, professors, the whole deal, it’s just over the internet. Tests are timed and are very specific to the curriculum. You can’t just “google” the answer. After 9 semesters, you have to travel to the campus for updated info via live classes (for example the new HRRR model). You also must pass a comprehensive, high-pressure final exam to earn your certificate. I’m happy I went through it!

Q: You’ve been working in television for a long time – what’s your secret to longevity?

A: I’ve carved out a nice niche for myself. I’m a guy from Buffalo showing off Buffalo and WNY. I never make myself the star of the segment. My pieces are just a way to see some of the interesting attractions, businesses, events, and people in our area. I think the fact that I’m going live adds an extra incentive to watch. Let’s face it, some live shots go better than others. Whenever I’m on location, I try not to think of myself as an extension of the station, but rather an extension of the viewer. It seems like just semantics, I know. But I don’t want to come off as some know-it-all reporter, I want to remain a Buffalo guy with a travelling spirit, a quick wit, and a true passion for WNY.

A: A job in broadcasting is all about survival. Work hard to make your station number one, and you will keep your job. I come from a family of blue-collar workers. Steel mill, machine shops, printing presses- etc. Why does that matter? Well I realize I’m lucky to have this TV job and I’m going to work hard to keep it going. That’s why my favorite story is always: the next one.

Q: What’s the craziest thing that has ever happened to you on live television?

A: Oh boy I could fill the internet with this answer. I wiped out a few times. Bit by a dog. I’ve done three live shots while bleeding. 4 times nobody showed up. I’ve been body slammed by professional wrestlers, in a hot tub with the Buffalo Jills, I’ve ironed a shirt at Cave of the Winds, I’ve run with scissors across the Rainbow Bridge, I barged into my parents’ house and woke up my mom on live TV, I’ve given away trips, I’ve sky-dived, ridden roller coasters and did a stunt fall off a roof. I’ve eaten bugs, ridden elephants, been chased by ostriches, and had a dog mate with my leg. I never know what’s going to happen. That keeps me interested, and I think the viewers too!

Q: What makes you Totally Buffalo?

A: I remember the Blizzard of 77, and I lost a tree in the October storm. If it’s above 65 degrees you will find me outside somewhere. I have a favorite pierogi and a favorite chicken wing sauce. I was there when the Bills beat the Raiders 51-3 and made it to their first Super Bowl, but I was also there when the Sabres lost to the Dallas Stars in the Stanley Cup Finals. My mom was Miss Buffalo. My daughter was raised to love all things WNY, and now she loves exploring our area too, and she represents Buffalo well wherever she goes! One grandpa worked at Bethlehem Steel, and the other worked at Trico. I’m an Irish guy that found himself a nice Polish girl to marry. I was born here, I will probably die here. Or maybe Aruba, still debating that last one.