This Day in Buffalo History – The Assassination of President McKinley 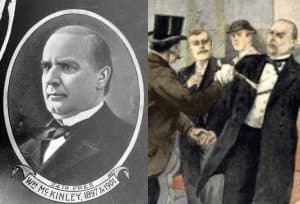 As many of us know, one of the greatest periods in Buffalo’s rich history was marked by the 1901 Pan American Expo, the dazzling world’s fair that allowed our great city to shine in all its glory on an international stage.  The event attracted hundreds of thousands of people from around the country and around the world, showcasing mesmerizing displays of architecture, electricity and invention.

September 6th, however, was a day of American tragedy at the Expo.  This was the day that President William McKinley, the 25th President of the United States, was assassinated in Buffalo by a 28-year-old anarchist.  President McKinley had been enjoying immense popularity as a result of the recent U.S. victory in the Spanish-American War, and the Expo was seen as an opportunity for McKinley and the entire nation to show the world that America was a leader and a true innovator in the new century.

Initial reports after the shooting indicated that President McKinley would make a full recovery, but his condition quickly worsened when gangrene had formed as a result of his wounds.  With his wife Ida by his side, he died 8 days later on the site where Canisius High School stands today.

McKinley’s assassination shocked the entire world.  It resulted in a worldwide outpouring of grief, as foreign leaders and monarchs declared national days of mourning in their respective countries.  His Vice President, Theodore Roosevelt, was sworn in as the 26th President of the United States on September 14, 1901 at the Ansley Wilcox House on Delaware Avenue in Buffalo.  More on that in a few days.

← previous post next post →
← If you're downtown today - don't miss out on this bake sale for a GREAT cause! WNYers living in Florida - prepare for Irma - including my family. 🙁 →