It is so hard to believe that Buffalo’s own Tim Russert has been gone for ten years. Russert was 58-years-old when he had a massive heart attack at NBC Studios in Washington, D.C.

He was such an icon, so beloved. Chief of the Washington bureau of NBC News and longtime moderator of “Meet the Press,” Russert was known for asking tough questions. Boy did he.

An entire decade without this man who was so revered in Buffalo and around the country. Russert grew up in South Buffalo, went to Canisius High School before heading off to John Carroll University.  Russert became a household name as the moderator of Meet the Press – and it was there we all saw how smart, fair, and determined a journalist he was. We also saw his undying love for Buffalo. On almost every show! 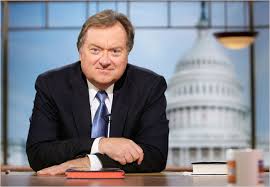 He was like all of us – protective of our home, a bit sensitive to negative comments and oh-so thirsty for a sports championship. He wore his passion for Buffalo on his sleeve – literally – and never wavered in his love and support of the Queen City and Western New York.

You can get up close and personal to some prized possessions of the famous newsman. After more than four years on display at the Newseum in Washington, the contents of Russert’s office moved to the Buffalo History Museum. The office recreation includes Russert’s “Thou Shalt Not Whine” sign, as well as numerous books, papers, and framed photos.

I was so fortunate to get to know Tim Russert during my time at Channel Two. He would stop in every now and again and loved chatting about everything from sports to politics. He was down to earth, kind and generous with his time. The last conversation I had with him was months before he passed away – we talked about how historic the upcoming presedential election was. He never got to see how things turned out.

One thing is certain – I know how happy and impressed he would be with how far Buffalo has come in the  past decade; he’d surely appreciate this renaissance.

His voice, his passion, his words – are deeply missed by many.

We sure do miss you, Tim.

← previous post next post →
← WNY mom has important & emotional message for those who judge, "It is easy to pass judgement when you don’t know the whole story." Buffalo Underdogs Rescue Dog of the Week and MORE! →