Former Bills head coach Rex Ryan wasted little time getting a new gig since he left Buffalo. As expected, he’s headed for broadcasting. He’s set to join ESPN’s ‘NFL Sunday Countdown’ show this Sunday as part of the network’s Super Bowl coverage. This makes perfect sense for Rex. He’s animated, entertaining, a good talker. Now ESPN is paying him to do it, and likely paying him well. None of this is different than what he did in Buffalo. He got paid very well here too, and he talked a lot. The only thing different now is the job title.

In an interview this week with The New York Daily News to discuss his new career, Ryan sounded off about his time in Buffalo and his unpleasant departure. He made a point of it to say “f*** those guys” in reference to his former employer, but then later said that he was ‘not bitter’. 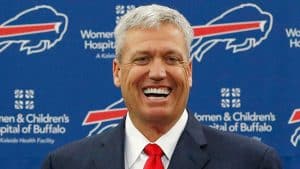 He also said that “I wish Sammy Watkins wouldn’t have had a broken foot” and “I wish our draft picks would’ve played”, right after he said “no excuses”.

At least he had the decency to offer positive comments about the people of WNY, pointing out that “the people in town have been good to me.” And we were. We supported Rex and his team through yet another failed effort in what is now a 17-year-long list of failed efforts.

As excited as Bills fans were about Rex Ryan, the hire never made sense to me. At a time when this team was really strong on defense and completely lost on offense, they chose to bring in a so-called mastermind of defense. Now, how is that logical? Let’s say you own a business that focuses on sales and service. And you take a long look at your operation and notice that you’re really strong on the sales end, but your service is just brutal. Would your next move be to bring in sales expert to fix up that struggling service department? If so, your next move after that would be Chapter 11.

As much as we all wanted it to work, it couldn’t and didn’t. I mentioned in an earlier column that I never enjoy seeing anyone get fired, so I wish him well in the broadcast studio.

And now on to the new plan for The Bills. Should we have any faith in it? The benefit of the doubt went away for me about 4 plans ago. I’m at a point with this team where I can only hope that they accidentally get it right, that they unexpectedly bump into success in their pursuit of something else.

There’s that word again – ‘hope’. It’s always for sale at One Bills Drive.

← previous post next post →
← Super-fan is headed to the Superbowl - to see football and Lady Gaga! At the SPCA of Niagara - "The volunteers are everything." →