Ralphie Aversa found his passion in NYC as a radio host, entertainment reporter, and blogger. Ralphie’s family and my family go way, way back. It’s a Falls thing, I suppose. It’s always nice when a good guy from a good family is doing great things. Niagara Falls is proud of him and so are we! In this Spotlight Interview – Ralphie talks about his coverage at the Grammys, taking selfies with Selena Gomez, and how he made it big. Oh yeah, we went there and asked celeb questions.

Q) When did you decide you wanted to do radio and why?

Well I grew up wanting to be in the media; eventually that manifested in to a desire to be on TV. Then while on a trip to tour the campus of St. Bonaventure, I learned two things from the then-Communications Dean, Lee Coppola: The natural progression is to go from print to radio to TV and that the core element in all three is writing.

So, my first internship kicked off on my 16th birthday at the Niagara Gazette’s sports desk. The spring of my senior year at Niagara Catholic, I did play-by-play of our games on WJJL. Then a day after my 18th birthday I started working on the Kiss 98.5 Street Team. To say the following 13 years have been eventful would be a great understatement.

Q) Tell us about your average day.

I really don’t have one, which can be both exciting and frustrating at times. This week is a great example: Between flying back from The GRAMMYs in Los Angeles, taping and hosting live radio shows, and now prepping for an event I’m hosting in Connecticut tomorrow afternoon at Mohegan Sun I’m lucky if I have time to drop-off and pick-up laundry. I try to keep a few daily constants though: a vegan breakfast, taping and hosting my radio show in the early evening and then of course heading back to the studio later (when I’m on live in New York). Also, I run. I’m lucky for a lot of reasons, one being that I’m right by Central Park. I usually get about 20 miles in a week.

Q) Do you get star struck?

A) I’d say I’m more self conscience when I’m meeting someone who I’m genuinely a fan of – whether it be Coldplay’s Chris Martin or Fall Out Boy. 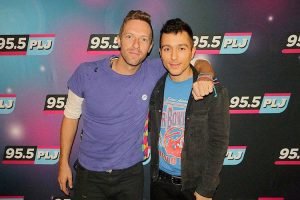 Q) Any celebs that have disappointed you by being not-so-nice?

A) Not really; they’re humans just like you and I with both good and bad days. The publicists are occasionally not-so-nice, but that comes with the territory sometimes.

Q) Who’s been your favorite interview?

A) Any interview that has an impact – whether it scores a lot of YouTube views or makes headlines. I had an interview with Kesha a few months after arriving in New York that made TMZ. Lorde talking about how she viewed Taylor Swift as a positive role model was pretty cool. Katy Perry and Adam Levine have always been great with me. And then of course there’s my most infamous interview: Justin Bieber asking me, “Who’s Shawn Mendes?” It’s funny now because they ended up becoming friends shortly after that went viral. 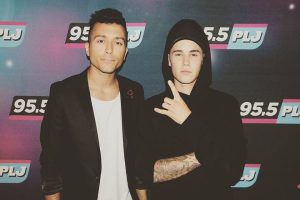 I have to add one more, especially given the venue. My first time at The GRAMMYs was in February of 2013. I’m beginning day one of our backstage broadcast and I’m feeling the weight of the event. Who’s my first interview of the day? Of course it’s Goo Goo Dolls’ lead singer Johnny Rzeznik. Apparently our SVP of Programming at the time and he grabbed dinner a few nights prior. That SVP, Jan Jeffries, told him about me being a Western New Yorker and my recent move to New York (I started here in October of 2012). Johnny told me he was proud me. It was a moment.

Q) Anyone that was super nice – more than you thought?

A) I manage my expectations properly! That said, not that he exceeded any expectations, but if you had told me as a kid that I’d be on a first name basis with Train’s Pat Monahan I might not have believed you. What a great guy. 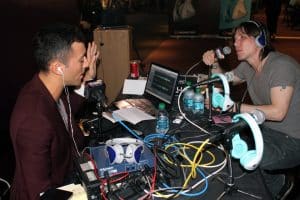 Q) How much research do you do going into interviews?

A) That depends on who it is and where it’s happening. A lot of my daily prep serves best for artists I’m familiar with; it’s a kin to cramming for a test the night before (which I know NOTHING about) opposed to pacing yourself, which is the better option.

In-studios sit-downs can go up to 20 minutes. Phone interviews are usually around 10. Red carpet interviews can be 90 seconds to three minutes and I’m speaking with a lot of different acts at those events. Unlike a Seacrest, I don’t have a producer prepping me with index cards and in my ear so I make sure not to bite off more than I can chew. 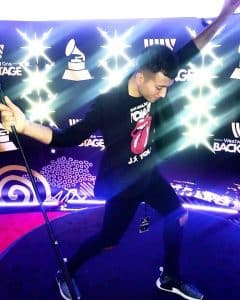 Q) What do people say when you tell them where you’re from?

Q) How has social media changed your job?

A) It has added and continues to add a lot of extra work. I probably spent as much if not more time editing and publishing to social networks and our websites during this last GRAMMYs trip than anything else. Like a lot of other tasks, it is easy to complete but it’s hard to complete effectively. It also adds another layer of instant communication with the audience though, which is cool. Radio is kind of like the original social media. Unlike TV or print, you can listen to us and then call in immediately to ask a question, make a request or win a prize. But the social networks offer another way to connect and for the most part that’s fun.

Also – just had this conversation with a friend in LA last week – I think it has given my family, specifically my parents, a better understanding of what I do for a living because not only can they hear it but they can see and share it as opposed to me just telling them about it. And that’s always nice.

Q) Anyone ever say NO to a selfie?

A) That’s a good question… I don’t think so! But because I haven’t dropped enough names here, let me tell you who takes the best one: Selena Gomez. A selfie goddess among mere mortals. 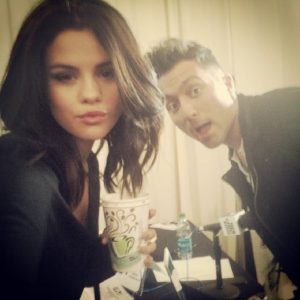 Q) When you come back to town – what’s your must-do for food and hang out?

A) Here’s the issue that arises every time I return home: I want to rest and I want to see as many friends and family as possible. But unless I talk my Mom in to hosting a big shindig and everyone clears their schedules, those are essentially two conflicting plans. I almost always see my immediate family and my cousin Anthony; and there’s always a home-cooked meal or two which is great. My Mom’s sauce, chicken francese and rice pilaf are legendary.

Also my Dad’s favorite watering hole is the venerable Stadium Grill on Hyde Park Boulevard, so I usually end up there with Mr. DeFazio and the boys for a round or three.

In a perfect world, I’d always end up with a half-tray and 25 char-grilled wings from GoodFellas too but the world’s not perfect yunno? By the way, I had no idea that they make the “Trusello’s” style pizza there! I went with a few friends last time I was home. There’s only one Trusello’s but wow was it good! Love that place.

Q) What makes you Totally Buffalo”?

A) I’d like to think my work ethic. That trait really defines our area and I love it. We’re blue-collar people. Look at the Bills. We loved Doug Flutie because he was the hard-working underdog. We never really cared for Rob Johnson because… well he wasn’t, or at least we never perceived him to be. Can you tell I’m still bitter about the way that all played out? To be honest, that in itself probably answers the question as well.

Thanks for spending some time catching up with us! We #totally agree about Trusello’s Pizzeria! FYI – We’ll be in NYC last weekend in March! 🙂

← previous post next post →
← Rock Your Socks for the Buffalo Ronald McDonald House And this little piggy - is going home. →