Last fall, a Western New York dad named Steve Witt created what’s become one of the hottest games in WNY out of necessity.  He needed to keep his kids busy while he was working.  If anyone’s worked from home with kids, you’d completely understand the predicament.  Despite trying to get his kids to enjoy games, toys and sports equipment that were readily available, nothing seemed to keep them occupied for more than a few minutes.   Then when the kids went outside to take care of the large trash for pickup and didn’t come immediately back in the house – Steve got curious.  What he found his kids doing outside would change everything.

Steve’s kids were flipping bottles. He was surprised and intrigued, and he didn’t just sit back and watch. Steve grabbed some old vinyl floor tile left over from the previous owners of the house and made a few targets for the kids to aim at. The kids enjoyed playing for points and the rest is history!  Now, ask any Mom or Dad about bottle flipping, and maybe you will get some eye rolling or negative comments, but Steve Witt, the creator of
Bottle-Bullseye™ will be the first to say, “Wait!  This game is much more than just flipping bottles!” 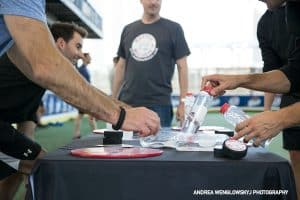 Bottle-Bullseye™ is a game where 2 or more players flip bottles AND land them on a sound & shock absorbing target to score points until one of the players’ scores 21 points and wins the game. The game is similar to darts but can be played both indoors and outdoors.  It has an “Instant WIN” feature and can be played by anyone almost anywhere.  Bottle-Bullseye™ can be played indoors or outdoors, on a table, grass, sand, or carpet.  A small space is needed and can be played sitting or standing.  It’s a great game for tailgating, camping, game nights, and indoor/outdoor play at home. 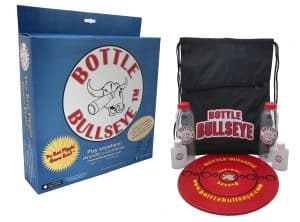 Steve Witt is not new to the entrepreneur process.  He’s worked in manufacturing and product development for 20+ years.  He has 2 patents on products that are still being sold today.  Bottle-Bullseye™ started as a side business for Steve and his wife Olena, but popular demand for the product has turned it into a full time business.  They believe in the “Made in America” stamp!  All the game pieces are from manufacturers in the USA and it even includes a carrying case, so it’s easy to set up and lightweight to carry around.  There are a handful of employees working on the product, and to get the word out they’ve used social media like YouTube videos, Instagram and Facebook. 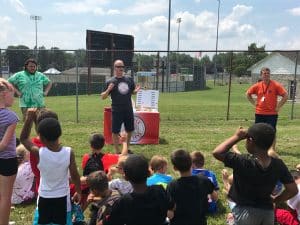 Steve and his team also spend time at local events like the UB Tailgate Series, beer and wine tasting events, and WNY recreation centers and schools too.   In fact, a local school district’s athletic director saw value in the game because of the eye hand coordination, strategic thinking (how to win the game with specific throws), quick math and memory skills, combined with social interaction.  That school district ended up ordering over 120 games for all the physical education teachers to use in their respective schools!

Steve is enthusiastic and excited about the reaction from Western New Yorkers who have tried out the game.  He tells one story about a Bottle-Bullseye™ fan, “This summer at an outdoor festival, a gentleman in a wheelchair told us that he doesn’t get an opportunity to play many recreational games.  He said he was thrilled that the game can be played sitting down and he got to have fun and interact instead of just being a spectator at a social gathering.”  Bottle-Bullseye™ really is a game for anyone!

So where can you pick up a Bottle-Bullseye™ game?  Local Buffalo toy stores have them in stock, Olympia Sports, Amazon and their website too!

← previous post next post →
← The Walk to End Alzheimer's Disease. We walked for my dad - so many walk for their loved ones. Celebrating her 18th birthday - and talking about beating cancer 16 years ago! →